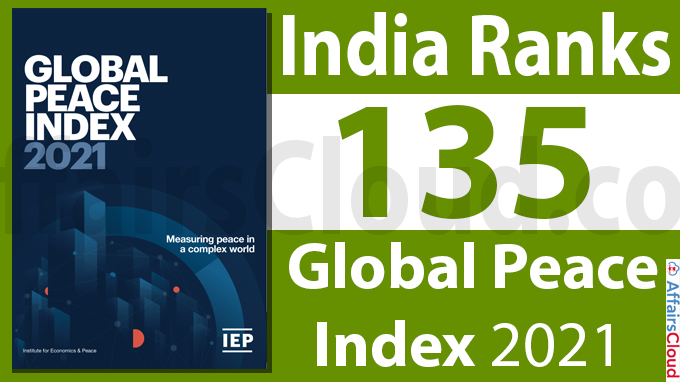 According to the 15th Edition of Global Peace Index 2021 (GPI 2021) released by Institute of Economics and Peace (IEP), India with a score of 2.553 has been ranked 135 out of 163 countries, which specifies ‘Low State of Peace’. Iceland topped the GPI 2021 Index followed by New Zealand & Denmark.

i.In total, peacefulness improved in 87 countries and deteriorated in 73.

ii.Only 3 out of 9 regions in the world improved in the peace index.

iii.The economic impact of violence to the global economy in 2020 was USD 14.96 trillion in Purchasing Power Parity (PPP) terms which is equal to 11.6% of the world’s economic activity.

i.December 2, 2020, According to the 8th Edition of ‘Global Terrorism Index (GTI) 2020: Measuring the Impact of Terrorism’ released by IEP, India was ranked as the 8th Most Affected Country in the World due to Terrorism in 2019.

About Institute of Economics and Peace (IEP)