On the eve of the 67th Republic Day Celebrations, President Pranab Mukherjee has approved 365 gallantry and other defence awards to honour extraordinary bravery and courage as well as distinguished service of the armed forces personnel and others. These awards were established in 1952. 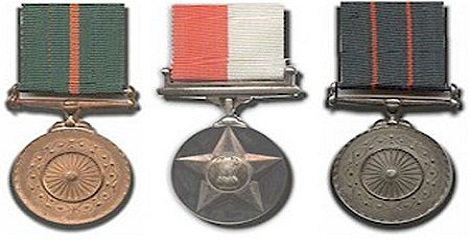 Ashok Chakra
It is India’s highest peacetime military decoration awarded for valor, courageous action or self-sacrifice away from the battlefield. It replaced the British George Cross. Flt Lt Suhas Biswas was the first Indian Air Force officer to be awarded the Ashoka Chakra.

Kirti Chakra
It is second in order of precedence of peacetime gallantry awards. Before 1967, the award was known as the Ashoka Chakra, Class II.

Shaurya Chakra
It is third in order of precedence of peacetime gallantry awards and comes after the Ashoka Chakra and the Kirti Chakra. Before 1967, the award was known as the Ashoka Chakra, Class III. Following is the list of 8 awardees of 2016:


Keys
Wartime Gallantry Awards – It recognizes highest degree of valour or self-sacrifice in the presence of the enemy.

Peacetime Gallantry Awards – It recognizes highest degree of valour or self-sacrifice away from the battlefield viz. Ashok Chakra, Kirti Chakra and Shaurya Chakra.