As a part of setting the stage for 2019 G20 Summit, to be held in Osaka, Japan, from 28-29 June 2019, a G20 Finance Ministers and Central Bank Governors Meet was held in Fukuoka, Japan on 8-9 June. It was one of the 8 ministerial meetings taking place in Japan before 2019 G20 summit. This is for the first time that Japan is hosting the G20 Summit & Ministerial Meetings at its eight different locations. 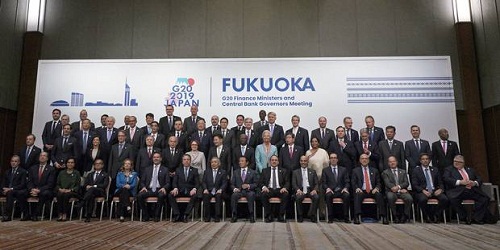 About Indian Delegation:
The Indian side was led by Union Minister for Finance & Corporate Affairs Nirmala Sitharaman which was comprised of Subhash C. Garg, Finance Secretary & Secretary Economic Affairs, Dr. Viral Acharya, Deputy Governor of RBI and other officers. This was her first overseas visit as the Finance Minister. She has raised the following points:

Focus towards global growth
The focus was on increasing protectionism and its implication on global growth and trade, as the International Monetary Fund (IMF) has cut its forecast for global growth from 3.6% to 3.3% in 2019.

Call for the creation of “digital tax”
i. The ministers have called for the creation of a digital tax for multinational technology companies in order to prevent tax evasion and to modernise policies. Its details will be finalized in 2020.
ii. Countries have agreed to set up a new tax model that is adapted to the digital economy.
iii. This initiative has two fundamental pillars:

About G20:
The G20 is made up of 19 countries and the EU. The 19 countries are Argentina, Australia, Brazil, Canada, China, Germany, France, India, Indonesia, Italy, Japan, Mexico, the Russian Federation, Saudi Arabia, South Africa, South Korea, Turkey, the UK and the US.