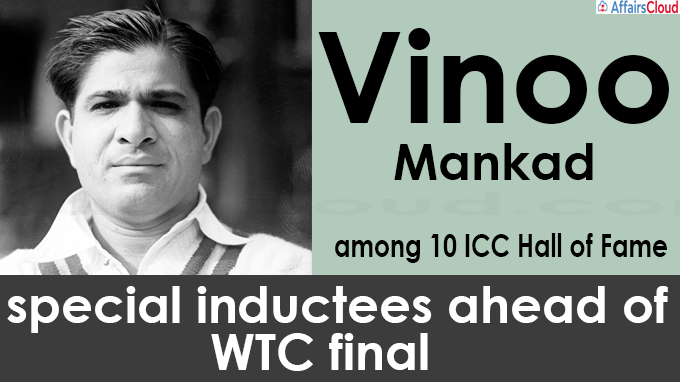 The International Cricket Council(ICC)  inducted 10 cricket icons, including India’s Vinoo Mankad, into the illustrious ICC Hall of Fame 2021.With this now there are 103 players in the ICC Hall of Fame.

The special edition intake of 10 cricket icons into the ICC Hall of Fame is to celebrate the prestigious history of Test cricket, and to coincide with the first ever ICC World Test Championship Final.

ii.He was an opening batsman and slow left arm orthodox bowler, known as one of India’s greatest-ever all-rounders.

iii.He is one of only three cricketers to have batted in every position during his Test career.

The ICC’s independent statistician compiles a longlist of ex-players or other significant cricketing figures for each era and these are presented to the Hall of Fame Nominations Committee.

And then the shortlisted players are voted for by the ICC Hall of Fame Voting Academy, comprising living Hall of Fame members, a FICA representative, prominent cricket journalists and senior ICC figures.

The players included in the list represented five different eras of Test cricket with two players each from five eras, dating back to cricket’s early days as,

1)Early Cricket Era: Players whose greatest contributions to the game were prior to 1918.

2) Inter-War Era: Players whose greatest contributions to the game were from 1918-1945.

5) Modern Era: Players whose greatest contributions to the game were from 1996-2015.

In April 2021, the International Cricket Council’s (ICC) banned the United Arab Emirates(UAE)cricketer Qadeer Ahmed Khan for five-years from all forms of cricket after he admitted to six breaches of ICCs anti-corruption code. On October,16, 2019, he was provisionally suspended by ICC.