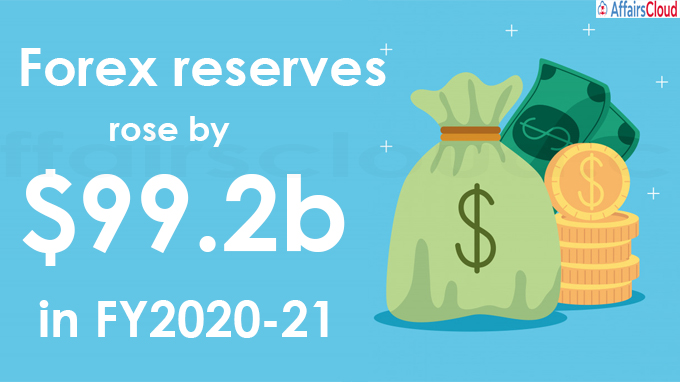 On June 30, 2021, the Reserve Bank of India (RBI) released the ‘Sources of Variation in Foreign Exchange(Forex) Reserves in India during 2020-21’ and reported an increase in the forex reserves in nominal terms, including the valuation effects, by USD 99.2 billion in FY21, compared to USD 64.9 billion of FY20.

RBI released the preliminary data on India’s balance of payments (BoP) for the fourth quarter (Q4) of FY21 (January-March, 2021) and reported a Current account surplus of 0.9 percent of GDP in FY21, as against a deficit of 0.9 percent in FY20 due to the sharp contraction in the trade deficit to $102.2 billion in FY21 from $157.5 billion in FY20.

iii.In Q4FY21, the net services receipts increased due to the rise in net earnings from computer, transport and business services on a year-on-year basis.

iv.The net outgo from the primary income account (reflecting net overseas investment income payments) increased to US$ 8.7 billion in Q4FY21 from US$ 4.8 billion in Q4FY20.

Note –  BoP is the statistical statement that contains the transaction in goods, services and income between the Indian economy and the rest of the world.

On May 31,2021, Under sections 10(4) and 11(1) of the Foreign Exchange Management Act, 1999 (42 of 1999), the Reserve Bank of India(RBI) had fixed the limits for Foreign Portfolio Investors’ (FPI) investment in Government securities (G-secs) and State Development Loans (SDLs) unchanged at 6 percent and 2 percent respectively, of outstanding stocks of securities for FY22.