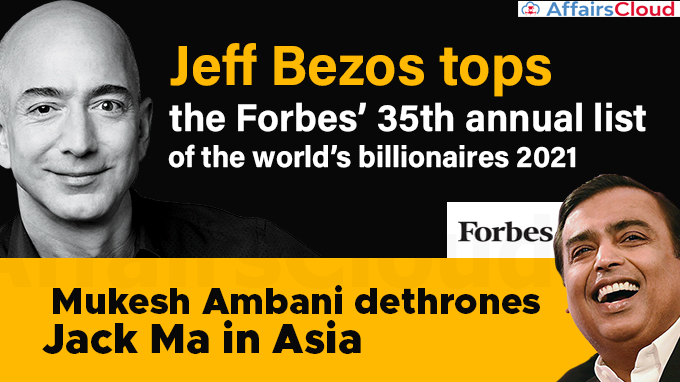 i.The number of billionaires on Forbes 35th annual list has increased to 2755 which is around 660 more than the 2020 list.

ii.The list has recorded a high of 493 newcomers to the list which includes 210 from China and Hong Kong and 98 from the United States(US).

iv.With 140 billionaires and 136 billionaires, India and Germany secured the 3rd and 4th spot.

According to Hurun Global Rich List 2021, Chairman of Reliance Industries (RIL), MukeshAmbani with a wealth of USD 83 Billion (~ INR 6 Lakh Crore) became the 8th Richest Person in the World. The List was topped by Elon Musk (CEO of Tesla), Jeff Bezos (CEO of Amazon) & Bernard Arnault (CEO of LVMH-Louis Vuitton).