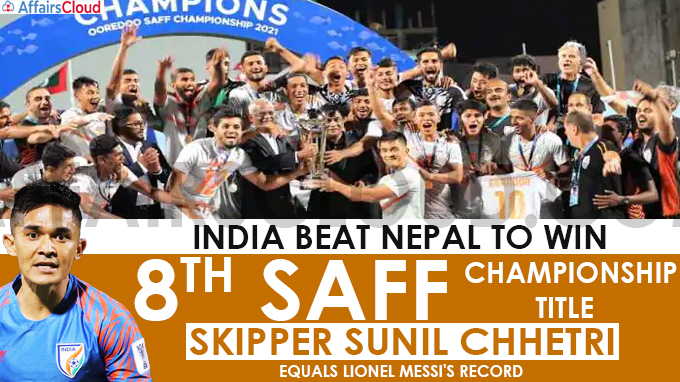 This is the first time for Nepal to reach the SAFF Championship finals.

i.SAFF Championship 2021 was held from 1st to 16th October 2021 at the National Football Stadium in Male’, Maldives.

ii.The teams that participated in the SAFF Championship 2021 were India, Maldives, Nepal, Bangladesh and Sri Lanka

ii.The first Championships were held in 1993 in Lahore, Pakistan and the championship was called the “South Asian Association of Regional Co-operation” Gold Cup.

i.Indian Football team captain, Sunil Chhetri won 3 individual honours for the Highest Scorer with 5 goals, the Most Valuable Player(MVP) of the tournament, and the Man of the match.

iii.The awards for the best young player and the best goalkeeper award were not given at the SAFF Championship 2021.