A recent survey among the travelers revealed that Five Indian museums featured among the best 25 in Asia while Leh’s ‘Hall of Fame’ has topped the India list as a “must-visit” place.

About Leh’s Hall of Fame :

The Hall of Fame, located near the Leh Airfiled, is a museum constructed as well as maintained by the Indian Army in the memory of the soldiers who had lost their lives during the Indo-Pak wars. 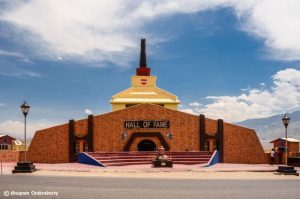 Bagore-ki-Haveliis a haveli in Udaipur in Rajasthan state in India. It is right on the waterfront of Lake Pichola at Gangori Ghat. Amir Chand Badwa, the Prime Minister of Mewar, built it in the eighteenth century.

The Victoria Memorial is a large marble building in Kolkata (formerly Calcutta), West Bengal, India, which was built between 1906 and 1921.

The Salar Jung Museum is an art museum located at Darushifa, on the southern bank of the Musi river in the city of Hyderabad,Telangana, India. It is one of the three National Museums of India.