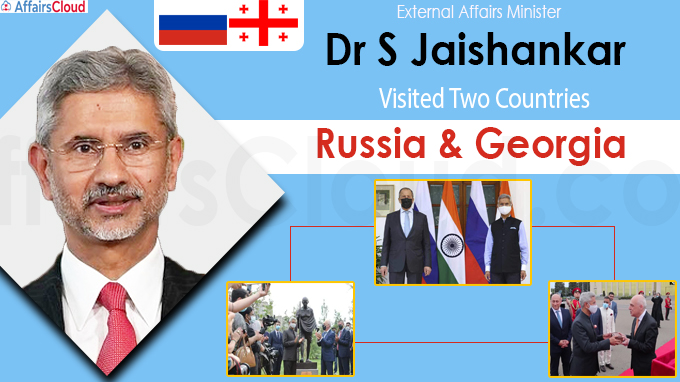 Union External Affairs Minister (EAM) Subrahmanyam Jaishankar visited Russia and Georgia to strengthen ties and cooperation. The details of his visit are explained as below:

Subrahmanyam Jaishankar was on a 3-day visit to Moscow, Russia on July 7-9, 2021 to prepare ground for the annual India-Russia summit 2021.

Indian EAM with his Russian counterpart Sergey Lavrov reviewed the progress on the cooperation between the two nations on space, nuclear, energy and defence sectors.

India and Russia will hold the 2+2 Dialogue of Foreign and Defence Ministers as per mutual convenience in 2021. This dialogue will be on the same pattern as with India-United States (US)

It should be noted that, Russia Direct Investment Fund (RDIF) is piloting Russia’s Sputnik V vaccine, which has partnered with the Hyderabad-based Dr Reddy’s Laboratories to supply COVID-19 doses vaccine in India.

On the request of Georgia, EAM handed over the holy relics of 17th century Georgian Queen St. Ketevan nearly 16 years after they were found in Goa.

She was from Kakheti, a kingdom in eastern Georgia. She was tortured and killed in 1624 in Shiraz during the rule of the Safavid dynasty and her relics were brought to Goa in 1627. In 2005, after years of research and study of medieval Portuguese records, the relics were found at the St. Augustine Church in Old Goa.

India, Georgia agree to work jointly to strengthen their ties

During talks with Georgia’s Vice Prime Minister and Finance Minister David Zalkaliani, both sides agreed to work jointly to strengthen their relationship.

Indian EAM also congratulated Pravasi Bharatiya Samman awardee Darpan Prasher who is a Vice President at the Indian Chamber of Commerce in Georgia.

S Jaishankar visited the United States (US) from 24th May to 28th May2021 where he met Antonio Guterres, the Secretary-General of the United Nations (UN) and participated in a productive strategy session with the team in the Permanent Mission of India to the UN.