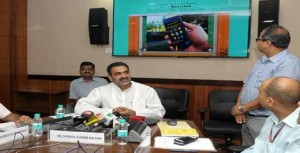 The vision of the project is the use of Space Technology and geoinformatics (GIS, GPS and Smartphone) technology along with high resolution data from UAV/Drone based imaging for improvement in yield estimation and better planning of Crop Cutting Experiments (CCEs), needed for crop insurance programme.

The Pilot Study is offered  to be launched during

Kharif season of 2015  in one District each of Haryana, Karnataka, Madhya Pradesh and Maharashtra

Rabi season of 2015-16  in two Districts each of Haryana, Karnataka, Madhya Pradesh and Maharashtra .

While launching the project Honourable Minister Of State informed that once the Pilot Study is successful, it will be extended to the other parts of the country.

An Android App,which will help in the real time data collection about hailstorm occurrences along with photographs and geographical coordinates (longitude and latitude) also launched by Dr. Sanjeev Kumar Balyan.The App was designed by ISRO (National Remote Sensing Centre, Hyderabad).

The App will help Government to get real time data about the Hailstorms which will be collected through the Agriculture Department officials of different States.  This will support in selecting the crop loss more objectively and in a very fast manner