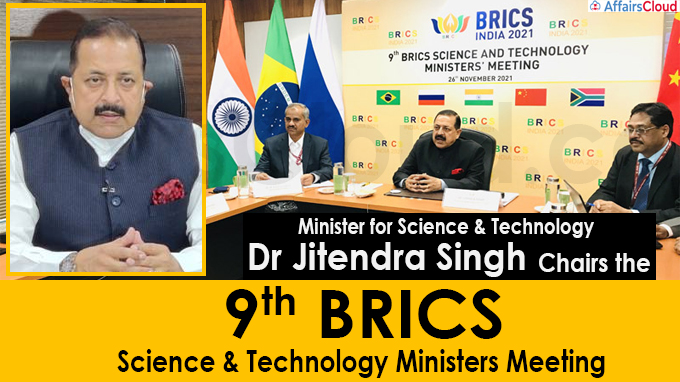 i.There is a need for innovation of cost effective, affordable, accessible, sustainable and scalable scientific solutions for STI by BRICS nations.

ii.BRICS is home to 41% of the world population with an increasing share of youth. Their engagement in STI directly impacts the welfare and progress of people.

iv.India’s Effort: Dr Jitendra Singh informed that India under “Vaccine Maitri” initiative is providing COVID-19 vaccines to countries around the world. As of 22 November 2021, India had delivered around 70.70 million doses of vaccines to 95 countries and out of these, 12.7 million doses were given to 47 countries by the Government of India. The remaining 58 million were supplied by the Serum Institute of India under its commercial and COVAX obligations.

v.India calls for BRICS to work towards rightful place in the global innovation index(GII). India’s rank in Global Innovation Index (GII) 2021 by the World Intellectual Property Organisation (WIPO) improved by two spots to 46th from 48th in GII 2020. NITI(National Institution for Transforming India) Aayog, along with the Confederation of Indian Industry (CII) and the World Intellectual Property Organisation (WIPO), virtually hosted the India Launch of the GII 2021 and the Global Innovation Conclave in September 2021.

India chairs the 6th BRICS (Brazil, Russia, India, China and South Africa) Young Scientist Forum (YSF) for the year 2021.The event was hosted by the Department of Science & Technology (DST), in collaboration with the National Institute of Advanced Studies, Bengaluru (NIAS).