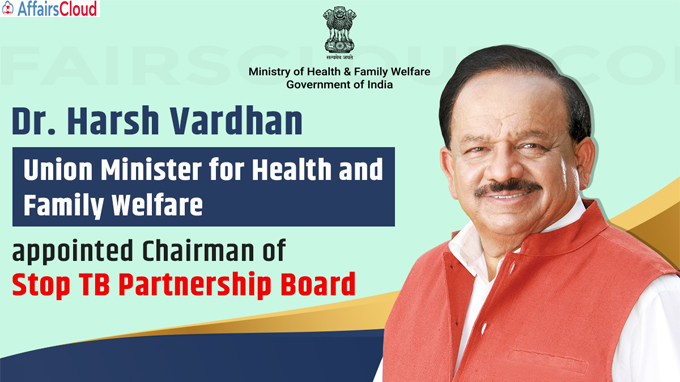 On 17th March 2021, Dr Harsh Vardhan, Union Minister, Ministry of Health and Family Welfare(MoHFW) was appointed as the Chairman of ‘Stop TB Partnership Board’ for a term of 3 years starting from July 2021. The appointment is in recognition of his contribution to the movement to eradicate Tuberculosis(TB) from India by 2025. He will succeed Dr. Luiz Henrique Mandetta, Minister of Health of Brazil.

He will work alongside Dr. Joanne Carter, Vice-Chair of the Stop TB Partnership Board.

i.The Stop TB Initiative was established following the 1st session of the Ad Hoc Committee on Tuberculosis Epidemic held in March 1998 in London.

iii.The Stop TB Partnership was founded in 2001 and the first Stop TB partners forum was held in October 2001 in Washington DC.

Efforts of India against TB: