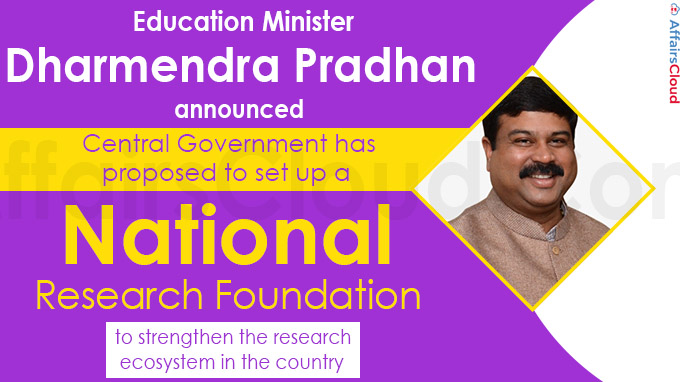 Union Minister for Education, Dharmendra Pradhan proposed to set up a National Research Foundation (NRF) for strengthening the research ecosystem in India.  The total proposed outlay of NRF is INR 50,000 crores over a period of 5 years.

NRF has been proposed to be set up as an autonomous body, it will be represented by all major research and education bodies.

Union Minister for Information & Broadcasting, Anurag Thakur stated that the Government will set up a National Centre of Excellence (CoE) for Animation, Visual Effects, Gaming and Comics. It will be set up in collaboration with IIT Bombay.

i.Anurag Thakur stated that the Media and Entertainment (M&E) sector is one of the largest growing sectors in India. Its value is expected to reach USD 34.8 billion by 2022.

ii.On December 2, 2020, Ramesh Pokhriyal ‘Nishank’ constituted a Task Force for preparing a blueprint on imparting Technical Education in Mother Tongue. It will be headed by Secretary of Higher Education (Amit Khare).