Delhi was acknowledged by Dell as one of 50 future-ready economies around the world that are embracing technology to adapt and thrive in an ever-changing and globalized future. 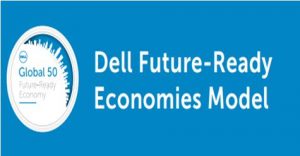 The released model is meant as a tool for cities to gauge their preparation for future growth. The Survey used to rank cities globally differed slightly from the S. model due to the lack of comparable statistics in some cases.

The cities positioned in the Global 50 ranking were evaluated along three dimensions: