We are here for you to provide the important current affairs October 29 2017 which have unique updates of all daily events from all newspapers such as The Hindu, The Economic Times, PIB, Times of India, India Today, Indian Express, Business Standard, all Government official websites. Our complete current affairs helps you to get more marks in Banking, insurance, UPSC, SSC, CLAT, Railway and all other competitive Exams. 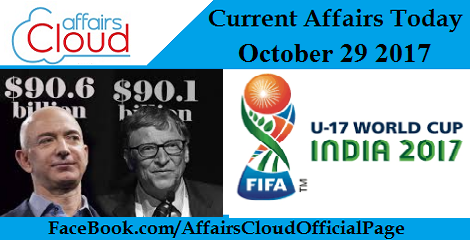 Centre releases Rs 8,698 cr as GST compensation to states
Central Government has released Rs 8698 crore as compensation to states for revenue loss following implementation of Goods and Services Tax (GST).
i. All states except Rajasthan and Arunachal Pradesh have been given compensation for the first two months (July-August) after GST rollout.
ii. Under GST framework, a cess is levied on top of 28 per cent tax on luxury cars, demerit and sin Goods like aerated drink and tobacco. Compensation to states for any revenue loss on account of GST implementation has been paid from revenue collected through this cess.
iii. Rs. 8698 crore that has been paid to states as compensation is 58 per cent of the total cess revenue of Rs 15060 crore collected in July and August 2017.
iv. GST, which was rolled out on July 1, 2017 is a destination-based, single indirect tax that is levied on consumption of goods or use of services across India. 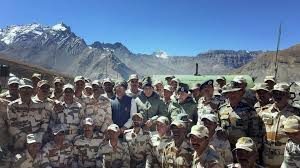 i. Indian Space Research Organisation’s (ISRO) geostationary communication satellite, GSAT-6 was launched in August 2015.
ii. Besides performing its primary task of communication, it also performs multiple tasks such as aiding in navigation, collecting data and image mapping.
iii. RK Pachnanda, the Director General of ITBP has stated that ITBP has been designated the nodal agency for obtaining and channelising GSAT-6 communication satellite.
iv. While supervising the feeds, if ITBP notices anything suspicious or untoward along the Sino-Indian border or along the Jammu and Kashmir border with Pakistan, it will alert the government and security agencies.
Quick Facts about Indo-Tibetan Border Police (ITBP):
♦ Formed in – 1962
♦ Headquarters – New Delhi
♦ Governing Body – Ministry of Home Affairs, Government of India
♦ Current Director General – RK Pachnanda

Army finalises mega Rs 40,000 crore procurement plan to replace ageing weapons
Indian Army has finalised one of its biggest procurement plans for infantry modernisation at a cost of nearly Rs 40,000 crore to replace its ageing and obsolete weapons.
i. Under this plan, around 7 lakh rifles, 44,000 light machine guns (LMGs) and nearly 44,600 carbines will be procured.
ii. Indian Army has been insisting to fast-track the procurement in back drop of evolving security threats along India’s borders with Pakistan and China.
iii. Besides, Union Government has directed Defence Research and Development Organisation (DRDO) to expedite its work on various small arms, particularly on Light Machine Guns.
iv. Defence Acquisition Council (DAC), Union Defense Ministry’s highest decision making body on procurement will soon give a go-ahead for new 7.62 mm assault rifles.
v. It is to be noted that Indian Army currently needs around 7 lakh 7.62×51 mm assault guns to replace its INSAS rifles. 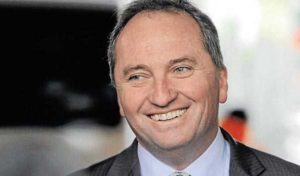 Australian government disqualified deputy PM:
i. Australia’s High Court declared Deputy Prime Minister Barnaby Joyce and four senators ineligible to remain in parliament. This has been done in line with a constitution ban that prevents dual citizens from sitting in the Parliament.
ii. This decision has made the ruling coalition government lose its one-seat parliamentary majority and lead to a by-election. Disqualified senators are replaced by members of their own parties without an election.
iii. Barnaby Joyce will be able to stand for re-election, if he withdrew the New Zealand citizenship he unknowingly inherited from his father.
About Australia:
♦ Capital – Canberra
♦ Currency – Australian dollar
♦ Prime Minister – Malcolm Turnbull

i. In the market place, any bank, other than those requested, can also pick up the application for sanction, and this will be one of the best updates. The portal brings transparency and competition among lenders and removes the need to approach several banks individually.
ii. The portal is mobile-enabled and provides a self-assessment module inbuilt within it.
iii. It sends various information on registered MSMEs from time to time and also allows loan applications to be perused and picked up by multiple lenders.
iv. The revamped version of the portal is planned to leverage the experiences to create and implement a much larger platform to transform the digital landscape for MSME loans.
SIDBI
Formed – April 2, 1990
Headquarters – Lucknow
Setup – Through act of Parliament 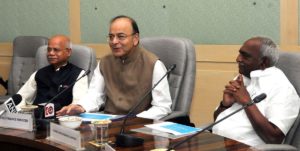 i. PFMS has been rolled-out by the Controller General of Accounts (CGA) at the behest of Union Finance Ministry.
ii. It is an end-to-end solution for processing payments and monitor the usage of funds including information on its ultimate utilization.
iii. PFMS will not only reduce paper work but would also provide mechanism to monitor and track unnecessary parking of funds by the implementing agencies.
iv. Union Finance Minister, Arun Jaitley is hopeful that PFMS will soon culminate into a Government wide Integrated Financial Management System (GIFMIS).
v .It is to be noted that Central Sector Schemes have a budgetary outlay of Rs.666644 crore and during the current financial year 2017-18, it stands at nearly 31 percent of the total Central Government expenditure.

RCom to shut down its 2G mobile business in about a month
The telecom company owned by Anil Ambani, The Reliance Communications, is planning to shut down its 2G mobile business by the end of November because the company is running under a debt of nearly Rs 45,000 crore.
i. As a result 1,200 employees will lose their jobs.
ii. The company has not made any official announcement on the job cut yet but has released a statement on shutting down of its 2G business.
iii. The decision to the wind-up 2G mobile business comes days after the company also announced to wind-up DTH services after the license expires.
iv. In June 2017, RCom had signed a standstill agreement with the banks, under which it need not pay any interest or principal amount to banks till December 2018.
v. The company has been given a reprieve by its lenders on loan repayments until the end of 2017, and the decision to wind up of businesses seems to be taken to meet the deadline for loan repayments.
vi. The company has also asked some of its employees to quit as part of its winding up of the operations.
vii. The company decided to adopt a 4G-focussed strategy for profitable growth of its wireless business.
viii. Therefore, RCom will be optimising its 2G and 3G , and related infrastructure and human resources, with effect fromNovember 30.
ix. The company’s 4G-led strategy will be executed through already operational spectrum-sharing and ICR (intra-circle roaming) arrangements with Reliance Jio.

Jeff Bezos – world’s richest person:
i. According to Forbes magazine, the wealth of Jeff Bezos, Amazon’s founder reached $90.6 billion, compared to the $90.1 billion of Microsoft co-founder Bill Gates.
ii. Jeff Bezos has been on the Forbes list of the richest billionaires since 1998, after his e-commerce business Amazon.com, Inc. went public.
iii. Forbes started tracking billionaires around the world in 1987. Jeff Bezos is the seventh person to hold the title of the world’s richest person and the third American to top the global ranks apart from Bill Gates and Berkshire Hathaway’s CEO Warren Buffett.
About Jeff Bezos:
♦ Occupation – Technology and retail entrepreneur and investor
♦ Position – Chairman, President & CEO of Amazon.com, Inc.

Gadkari digitally flags off RORO ship from Chennai Port to Bangladesh
On October 28, 2017, Union Minister of Shipping, Road Transport & Highways and Water Resources, River Development and Ganga Rejuvenation, Nitin Gadkari digitally flagged off a Roll-On/Roll-Off (RoRo) ship from Chennai Port to Mongla port in Bangladesh.
i. M.V. IDM DOODLE, a RoRo cum general cargo vessel carried an export consignment of 185 trucks by Ashok Leyland to Bangladesh.
ii. Export of these trucks was earlier done through land route by covering a distance of about 1500 km. Transport through the sea route will not only save about 15-20 days of travel time but will also be more cost effective.
iii. As the fuel consumption in terms of per tonne cargo is much lower via sea route, transportation by sea will also reduce carbon footprints on the environment.
iv. Roll-on/roll-off (RORO or ro-ro) ships are designed to carry wheeled cargo, such as cars, trucks, semi-trailer trucks, trailers, and railroad cars, that are driven on and off the ship on their own wheels or by using a platform. 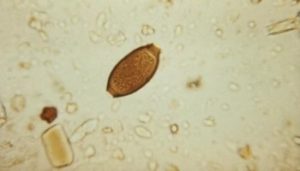 New virus linked to kala-azar:
i. Kala-azar is an endemic disease in four countries namely Bangladesh, Bhutan, India and Nepal. If untreated, kala-azar can kill the patient within two years.
ii. Earlier, the parasite Leishmania donovani was believed to be responsible for the kala-azar infection. People get infected when bitten by an insect called sandfly, which carries the disease-causing parasite.
iii. Recently, a group of scientists from West Bengal and Uttar Pradesh have said that another parasite called Leptomonas seymouri may also be responsible for the infection. Their findings have been reported in an online version of Archives of Virology.
iv. Scientists are still not clear how the parasites cause the infection and how they manage to hide within the body. But, its discovery helps to find a new kind of treatment and to eradicate the disease.
About Kala-azar:
♦ Type – infectious disease
♦ Symptoms – fever, weight loss, fatigue, anemia, and substantial swelling of the liver and spleen 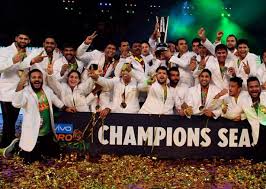 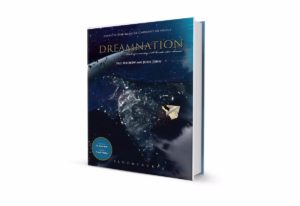 Dreamnation: Uniting a Country with Handwritten Dreams:
i. The book “Dreamnation: Uniting a Country with Handwritten Dreams” contains inspiring words of Dr A.P.J. Abdul Kalam. It was released on 15th October 2017, which is the 86th birth anniversary of APJ Abdul Kalam.
ii. The book was co-authored by Saji Mathew and Jubie John. It was published by Bloomsbury in collaboration with NGO LetterFarms.
iii. The book was released on social media site Twitter. The book also includes a collection of 200-plus handcrafted and handwritten postcards from across India.
About APJ Abdul Kalam:
♦ He was the 11th President of India
♦ Profession – Professor, Author, Aerospace scientist 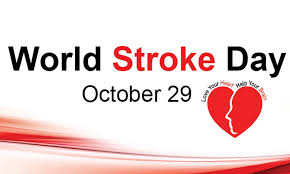