PM Laid Foundation Stone Of Greenfield Airport And Tuem Electronic City In Goa
i. Prime Minister Narendra Modi visited the coastal state of Goa on November 13, 2016 to lay foundation stone for two projects: Greenfield airport in North Goa and Tuem Electronic city. The function was held at Dr Shama Prasad Mukherjee stadium in Bambolim village.
ii. The first phase of the airport is expected to be commissioned in the financial year 2019-20.The Tuem Electronic City project is expected to generate 25,000 jobs for the youth in the state.
iii. Prime Minister Narendra Modi visited Pune on November 13, 2016 to inaugurate the International Conference and Exhibition on Sugarcane Value Chain – Vision 2025 Sugar organised by Vasantdada Sugar Institute (VSI) at Manjari.

12-km-long elevated railway corridor to be set up in Guwahati under Smart City Project
i. The Centre on November 10, 2016, announced the construction of a 12-km-long elevated railway corridor inside Guwahati, worth Rs 5,000 crore, as a part of the smart city project.
ii. The project covering the entire corridor between Kamakhya and New Guwahati will be elevated
iii. The Indian Railways will form a joint venture in the form of a special purpose vehicle with the state government to implement the project.
iv. There will be 7 platforms in the 12 km stretch and the terminals will be developed for commercial purposes too.
v. The three stations in Kamakhya, Guwahati and New Guwahati will be connected to metro line, which is coming up in the city soon.
vi. There will be 4 elevated tracks with 12 level crossings and it will take just 15 minutes to cross the stretch. 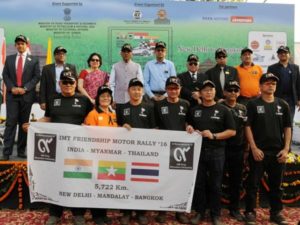 November 13 to December 3, 2016 in 20 Indian made vehicles. About 80 participants from the 3 countries will participate in the rally covering a total distance of 5,722 km along the IMT Trilateral Highway.
iii. This Friendship Rally aims to improve the road connectivity in South East Asian region and to spread awareness among the stakeholders of India, Myanmar and Thailand about the Friendship Motor Vehicle Agreement.
iv. The Ministry of Road Transport and Highways, Government of India have taken major steps towards negotiating a Trilateral Motor Vehicle Agreement (MVA) among the three nations to regulate free movement of passengers and cargo vehicles among these three countries.

Indian Navy to select Candidates through JEE (Main) ranks
i. Indian Navy is considering to select candidates into the 10+2 B Tech cadet scheme through JEE (Main) ranks, instead of class 12th
ii. Earlier, the candidates were selected on the basis of their PCM (Physics, Chemistry, Maths) percentage, scored in their class 12 board examination.
iii. The move can result to more candidates taking JEE (Mains) examination in 2017, in order to become eligible for the January 2018 courses offered by Indian Naval Academy (INA).
iv. All this has become necessary because the Navy needs a strong cadre of officers with advanced technical expertise to handle the sophisticated “platforms”

Colombia’s Government, FARC Rebels Sign Modified Peace Agreement
i. Colombia’s government and its largest rebel group signed a new, modified peace accord on 12 November 2016. The accord is a modification of the agreement signed between President Juan Manuel Santos and the Revolutionary Armed Forces of Colombia(FARC) inked on 26 September 2016, which was however rejected by the voters in a referendum on 2 October 2016. 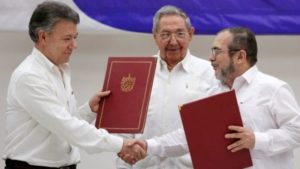 ii. The agreement aims at ending a 52-year-long conflict between the rebel group and the government that has claimed more than 2, 20,000 lives and because of which more than 8 million people lost their home.
iii. The modification was necessary as in view of former President of Colombia Alvaro Uribe because the deal was too lenient on a rebel group that had kidnapped and committed war crimes.
iv. Some of the modifications were related to justice, punishment for combatants accused of war crimes and reparations for the conflict’s victims.
v. The deal was signed between Humberto de La Calle from government side and rebel negotiator Luciano Marin.

Center of Excellence set up by TAFE in Rajasthan
Tractors and Farm Equipment Limited,(TAFE) the world’s third largest tractor maker, with the cooperation and support of the  Rajasthan government, has set up a Centre of Excellence — ‘JFarm Rajasthan’ —and a Custom Hiring Centre in six zones in Rajasthan at a total outlay of Rs.970 crore.
♦ TAFE Chairman & CEO Mallika Srinivasan, made the announcement in the presence of Chief Minister Vasundhara Raje at the Global Rajasthan Agritech Meet (GRAM) on November 10, 2016.
JFarm Rajasthan :
i. The JFarm is an advanced model of TAFE’s adaptive agri-research center in Chennai.
ii. The centre spread over an area of 50 acres land will highlight the latest and best practices in agronomy and farm.
iii. Latest trends in production, protection and processing of crops
iv. It will also appear as a farm skills development centre, agricultural extension service, and hi-tech technology demonstration and customer experience centres at Bhawanimandi and Jhalawer.

Molinari Rail To Set Up Manufacturing Unit In India 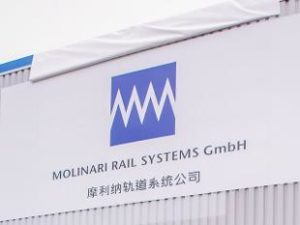 i. Swiss based Molinari Rail AG has entered into a strategic agreement with government of India to design, manufacture and deliver the auxiliary power units (APUs) for 1,000 diesel locomotives to be built in India for Indian Railways.
ii. According to the agreement Molinari Rail will set up a manufacturing and assembly centre for auxiliary power units for diesel locomotives in India by 2017.
Key People :
♦ President and CEO of the Molinari Rail Group – Michele Molinari
♦ Railway Minister : Sureash Prabhu

Fortune magazine named Mark Zuckerberg Business Person of the Year
i. Fortune magazine has named the co-founder and CEO of the biggest social networking site Facebook, Mark Zuckerberg as Business Person of the Year, 2016.The 32 year old Zuckerberg, was honored based on various criteria, including the company’s performance year over year as well as his vision for growth and the ability to achieve it.
ii. The list consisted of 50 personalities. The top 5 among them are

Pune girl Anvita Prashant Telang wins Google India’s doodle competition
Anvita Prashant Telang, 11 year old girl from Pune has been named as the national winner of the “Doodle 4 Google” contest for her Doodle submission on the theme titled “If I could teach anyone anything, it would be“.
Doodle 4 Google :
i. Aim of the event : To promote creativity, passion and imagination in younger users.
ii. The entries that came from over 50 cities across the country 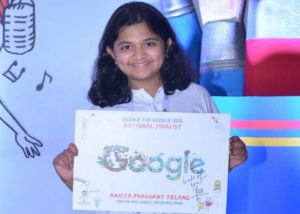 The Guest’ won short film award at MAMI Film Fest
i. Short film ‘The Guest’, which emerged as the winner in the ‘Large Short Films’ category at the Mumbai Academy of Moving Image (MAMI) Film Festival.
ii. The short film has been directed by Ayappa KM and stars Avinash Tiwari and Yana Mistry.
iii. The film is about a young man, who unknowingly ends up in a strange place.

Indian-origin humanitarian, Imtiaz Sooliman gets Global Citizen Award
i. An Indian-origin man in South Africa, who founded the internationally-lauded Gift of the Givers Foundation, has been awarded the prestigious Global Citizen Award for his “innovative and visionary” contribution to the global community.
ii. Imtiaz Sooliman was honoured at the end of the 10th annual Global Residence and Citizenship Conference in London.
iii. The award consists a specially-made commemorative medal, an award certificate signed by the president of the independent Award Committee and a USD 50,000 monetary prize, of which USD 25,000 is donated to the UN High Commissioner for Refugees.

i. Mahindra and Mahindra appointed Pawan Goenka as Managing Director and Anand Mahindra was redesignated as  executive chairman.
ii. Goenka joined Mahindra as general manager, R&D in 1993.
iii. He was elevated as president of the automotive division in 2005, head of automotive and farm equipment vertical in 2010 and as executive director on the board in 2013. 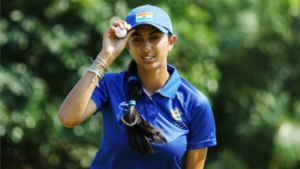 European Tour title by clinching the Hero Women’s Indian Open at the DLF Golf and Country Club in Gurgaon on November 13, 2016.
ii. Aditi shot an even par 72 on the final day carrying a two-stroke overnight lead.
iii. She finished with a total score 3-under 213 and won a prize of USD 60,000.
iv. Brittany and Belen finished tied second with identical totals of 2-under 214 after 54 holes

Vandana Katariya to Lead Indian Women’s Hockey Team in Australian Series
i. Forward Vandana Katariya will lead Indian women’s hockey team in the Test Series against Australia to be played from November 23 to November 30 at Melbourne, Australia
ii. Defender Sunita Lakra will be the vice-captain of the team and experienced Poonam Rani, Anuradha Devi Thokchom, Vandana Katariya, Preeti Dubey and Sonika are the strikers named in the squad by Hockey India
iii. The midfielders and others responsibilities of the 18-member squad are remain unchanged 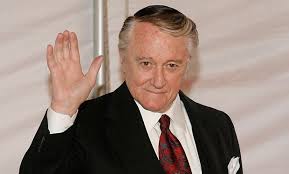 i. Hollywood star Robert Vaughn, who is best known for his role as secret agent Napoleon Solo in the NBC spy series The Man From Uncle, died at the age of 83.
ii. The actor died of acute leukemia.
iii. He is survived by his wife Linda and two children, Cassidy and Caitlin