We are here for you to provide the important current affairs March 12 2018 which have unique updates of all daily events from all newspapers such as The Hindu, The Economic Times, PIB, Times of India, India Today, Indian Express, Business Standard, all Government official websites. Our complete current affairs helps you to get more marks in Banking, insurance, UPSC, SSC, CLAT, Railway and all other competitive Exams. 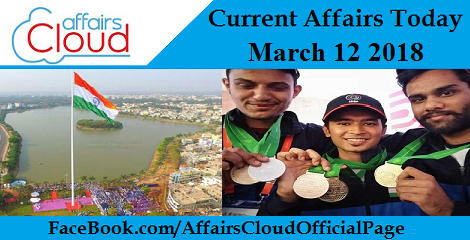 Highlights of Maharashtra Budget 2018 – 2019
On March 9, 2018, Maharashtra Finance Minister Sudhir Mungantiwar presented the state budget for 2018-19 in legislative assembly while Minister of State for Finance, Deepak Kesarkar presented the budget in legislative council. This was the fourth budget of the incumbent BJP-led government under Chief Minister Devendra Fadnavis.
i. Maharashtra Budget 2018-19 focused on farmers and youth.For fiscal 2018-19, revenue deficit is estimated at Rs. 15375 crore.
ii. Rs. 13385 crore budget has been allocated for home department, out of which, Rs. 165 crore will be used for state-wide CCTV surveillance network.13000 gram panchayats will be connected digitally under the Centre’s BharatNet project……………………………Click here to Read more Details about India’s tallest tricolour in Belagavi:
i. The flag hoisted in Belagavi is 110m high from the base plate to the top while its size is 120X80 ft.
ii. The flag was hoisted by Belagavi District in-charge Minister Ramesh Jarkiholi.
iii. It weighs 500 kg and was hoisted through an electro mechanic operating system.
iv. Before hoisting of the tallest flag at Belagavi, 107 metre tall tricolour flown in Pune was the highest, followed by  105 metre tall tricolour at Attari-Wagah border.
v. To have the tallest tricolour in  Balagavi was the dream project of Belagavi (North) Congress MLA Feroz Sait.

Bengal tops in rural job scheme, T.N. is second
According to data provided by the Minister of State for Rural Development, Ram Kripal Yadav in Rajya Sabha, West Bengal is the best performing State in terms of allotting jobs and utilising funds under the Mahatma Gandhi National Rural Employment Guarantee Act (MGNREGA).
Performance of States under MGNREGA Scheme:
i. For 2017-18, West Bengal has so far spent more than Rs. 7335.31 crore and has generated more than 28.21 crore work days under MGNREGA.
ii. West Bengal is followed by Tamil Nadu (TN) which has spent Rs. 5981.75 crore and has generated 22.17 crore work days  during 2017-18, so far.
iii. Goa ranked at the bottom, with spending Rs. 2.47 crore and generating just 94000 work days under the scheme.
Quick Facts about Mahatma Gandhi National Rural Employment Guarantee Act (MGNREGA):
♦ Earlier name – National Rural Employment Guarantee Act 2005
♦ Launched in – 2006
♦ Administered by – Union Ministry of Rural Development 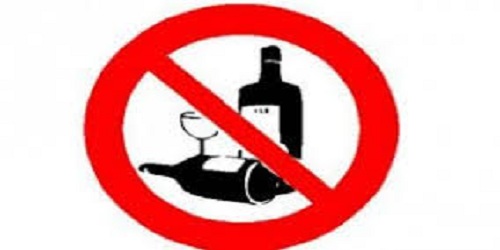 Banlotwa – Ranchi’s first alcohol-free village:
i. Jharkhand Chief Minister Raghubar Das lauded the residents of the village for achieving this feat and has given Rs 1 lakh cash to the village head of Banlotwa.
ii. It is to be noted that, two years ago, Raghubar Das had announced that any village becoming alcohol-free would be given Rs. 1 lakh for its development.
iii. Mr. Das stated that people of Banlotwa have joined hands to make the village ‘nasa mukt’ (alcohol-free). Even Jharkhand state government wants to ensure greater participation of the people in bringing about change and development.
Quick Facts about Jharkhand:
♦ Capital – Ranchi
♦ Current Governor – Draupadi Murmu
♦ Current Chief Minister – Raghubar Das
♦ Important Wildlife Sanctuary – Hazaribag Wildlife Sanctuary

Multilateral HADR Air Force exercise “Samvedna” begins off Kerala Coast
Multilateral Humanitarian Assistance and Disaster Relief (HADR) Air Force exercise, ‘Samvedna’ began off the coast of Kerala on March 12, 2018.
Details about Multilateral HADR Air Force exercise “Samvedna”:
i. In Hindi, Samvedna means ‘Empathy’. The exercise will focus on practising Air Force-centric HADR solutions in a Multi-national cooperative Disaster Management environment.
ii. ’Samvedna’ is being conducted by Indian Air Force (IAF) in association with South Asian Region nations.
iii. Representatives from air forces of Sri Lanka, Bangladesh, Nepal and the United Arab Emirates (UAE) are participating in this exercise.
iv. It will thus establish synergy among Air Forces of participating countries in jointly carrying out HADR activities in wake of natural calamities.
v. The exercise will be conducted as response to a mock situation of a tsunami hitting the western coast of India. The participating air forces will coordinate with each other in post-tsunami disaster management along the western coast and western islands of India.
vi. The exercise will conclude on March 17, 2018. 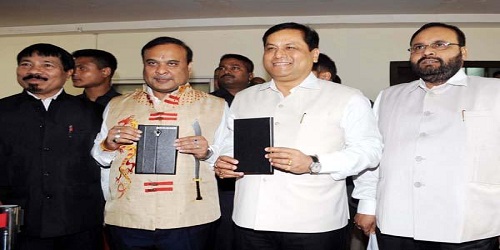 More information about Assam State’s E-Budget:
i. Each legislator of Assam State Legislative Assembly was provided with a tablet (computer) having details of the Budget.
ii. During the discussions in the house, the legislators were able to access the details through this tablet.
iii. In order to truly make it an E-Budget, the reporters covering the state budget were given a pen drive containing the details.
iv. Besides, Assam State Budget 2018-19 has also been made available on Google app.

First edition of ‘Soldierathon’ organised at Nehru stadium
On March 11, 2018, Union Minister Dharmendra Pradhan, Minister of State for External Affairs General VK Singh and cricketer Gautam Gambhir attended the first edition of ‘Soldierathon’ in New Delhi.
About ‘Soldierathon’ in New Delhi:
i. ‘Soldierathon’ is a special marathon aimed at raising funds for welfare of Indian soldiers and their families.
ii. Over 6000 individuals participated in this marathon. Cricketer Mohammad Kaif and Actor Varun Sood also witnessed this marathon.
iii. The marathon began from Jawaharlal Nehru Stadium in New Delhi. Participation was open in four categories viz. 10km, 5km, 3km and wheelchair.
iv. Funds raised during this event will be donated to Indian Army’s Artificial Limb Centre (ALC) and for the education of martyrs’ children.
Facts about Indian Army’s Artificial Limb Centre (ALC):
♦ Established in – 1944
♦ Located in – Pune
♦ Objective – to provide artificial limb, appliances and to deliver rehabilitative care to soldiers of Indian Army who lost their limbs in combat.

National Academy of Coastal Policing (NACP):
i. This is said to be the first-of-its-kind institution in India. It will be run by a multi-agency team of paramilitary and defence forces.
ii. This academy aims to sharpen the skills of marine forces of various Indian states that have coastal lines.
iii. The Bureau of Police Research and Development (BPRD) will pilot the setting up of NACP. The Border Security Force (BSF) will ensure security of the campus.
iv. The navy and the Coast Guard will help in developing the training curriculum, providing skilled trainers and access to jetties and boats for the academy.
v. Faculty from the Navy, Coast Guard and the BSF, will train police personnel and staff of other security agencies.
vi. Training will be provided on maritime laws, seamanship, boat work, navigation, weapons handling, usage of sea guidance and surveillance gadgets and survival skills for long haul operations on the sea etc.
vii. The academy will be operated temporarily at the fisheries department campus in Okha for nearly 3 years. Later, a new permanent campus will be set up in Devbhoomi Dwarka district.
viii. 24 quarters of the fisheries department will be utilised to run the academy initially. The home ministry has allocated funds for Rs 1 crore to take over these assets.
ix. The National Academy of Coastal Policing (NACP) will start functioning from April 2018.
About Bureau of Police Research and Development (BPRD):
♦ Headquarters – New Delhi
♦ Director General – Dr. A.P. Maheshwari India placed 33rd worldwide in web-borne threats: Kaspersky
As per cybersecurity and anti-virus provider, Kaspersky Labs, India ranks 33rd worldwide on the list of countries facing web-borne threats.
Web-borne threats in India:
i. This revelation was done by Kaspersky Lab at the recent Chief Information Security Officer (CISO) Summit in Mumbai, through a presentation on the threat management and defense landscape in India.
ii. CISO added that India secured 37th place worldwide in attacks by local threats and 13th in incidents with malicious hosts located within the country.
iii. As per the data, 27.4 percent Indian users were affected by web-borne threats, while 62.7 percent users were attacked by local threats.
Quick Facts about Kaspersky Lab:
♦ Founded in – 1997
♦ Headquarters – Moscow, Russia Bolivia unfurls ‘world’s biggest flag’:
i. The flag extends between the cities La Paz and Oruro. It is made of blue cloth and features Bolivian national symbols. Its width is three meters.
ii. Bolivian people held the flag as a sign of support for Bolivia’s claim for access to the Pacific coast.
iii. Bolivia demands access to the Pacific Ocean, which it lost to Chile in a war in the 19th century.
iv. Bolivia will present its case demanding access to Chile’s Pacific coast at the International Court of Justice (ICJ) on 19th March 2018.
About International Court of Justice (ICJ):
♦ Headquarters – The Hague, Netherlands
♦ President – Judge Abdulqawi Ahmed Yusuf

DCB Bank launches online service to send money globally
DCB Bank has launched “DCB Remit”, a remittance service to enable customers to send money online globally.
DCB Remit:
i. Using DCB Remit, any resident Indian can register online and send money to 20 countries such as the US, Canada, Australia, the UK, the UAE and Germany.
ii. Once the exchange rate of money is fixed, customer can transfer money from any account to DCB Bank account. This in turn can be transferred to the beneficiary account present in another country on or within the next business day.
iii. DCB Remit has been introduced in collaboration with Avenues Payments. Avenues Payments specialises in providing cross border payments.
About DCB Bank:
♦ Headquarters – Mumbai
♦ MD & CEO – Murali M. Natrajan 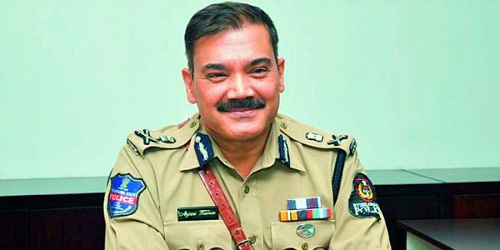 Anjani Kumar – Hyderabad City Police Commissioner.
i. Anjani Kumar is an IPS officer of 1990 batch. He has been appointed the new Commissioner of Police, Hyderabad, as part of a major reshuffle of senior police officers in Telangana.
ii. Kumar was the Additional DGP (Law & Order). The post of Hyderabad Police Commissioner was vacant for the past 4 months.
iii. Additional Commissioner of Police (Law and Order), V.V. Srinivasa Rao was in-charge of the post during those 4 months.
iv. V.V. Srinivasa Rao has been made the Chairman of Telangana State Level Police Recruitment Board.
Some museums in Telangana:
♦ Alampur Museum
♦ Heritage Jail Museum
♦ Warangal Museum 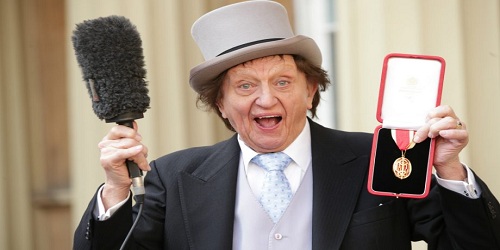 Death of Ken Dodd:
i. Ken Dodd was 90 years old. He was well known for his very long stand-up shows.
ii. Also, he was a popular singer. His popular works are “Happiness” and “Tears”. He had recently returned from hospital after receiving treatment for chest infection and had married Anne Jones.
Some major sea ports of India:
♦ Kandla Port – Gujarat
♦ Nhava Sheva – Maharashtra
♦ Mumbai Port – Maharashtra 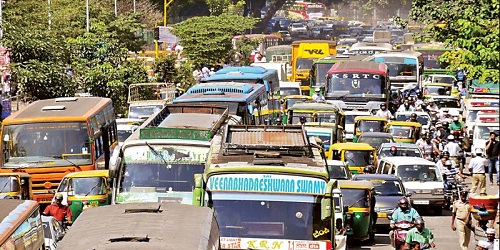