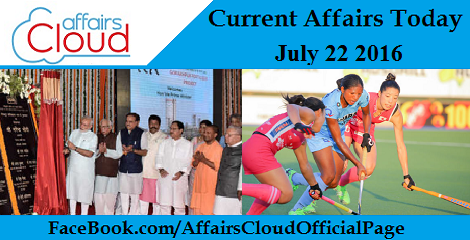 PM Modi Laid Foundation Stone of AIIMS in Gorakhpur
i. Prime Minister Narendra Modi laid the foundation stones of an All India Medical

Institute of Medical Sciences (AIIMS) and a fertiliser plant in Gorakhpur in eastern Uttar Pradesh.
ii. AIIMS: The institute is being estimated cost of Rs. 1,011 crore under the Pradhan MantriSwasthyaSurakshaYojana and will have 750 beds and emergency as well as ayush sections.
iii. Fertilizerplant: The fertiliser plant had been lying idle for the last 26 years, which was set up in 1969 but it was locked up in 1990.

NDMC ties up with NEERI to develop sewage treatment plants
i. New Delhi Municipal Council (NDMC) has signed an agreement with National Environmental Engineering Research Institute (NEERI) to develop 12 sewage treatment plants (STP) in order to develop and restructure the green area big and small parks.
ii. This new agreement will help in increasing the green cover in NMDC areas and also to reduce the dust pollution.
iii. As a initial step, a total of 12 STP are going to be laid across the NMDC areas.
iv. All these plants will be connected to the green area parks, schools and are going to be maintained by the Horticulture Department.
v. These plants will have a sewage water treating capacity of 50000-1 lakh litre a day. They also started tree plantation in the barren land in order to curb dust pollution by planting 2 lakh trees in the laden land.

Lok Sabha passes Bill for new NIT in Andhra Pradesh
i. Lok Sabha passed the National Institute of Technology, Science, Education and Research (Amendment) (NITSER) Bill, 2016 to establish a National Institute of Technology in Andhra
ii. With a estimate of 226 crores for three years, initially 40 crores has been released by the central Government for the establishment of a new NIT in Andhra Pradesh.
iii. The NIT in Andhra Pradesh has been established in lines with the provisions of Andhra Pradesh Reorganisation Act, 2014. The Reorganisation Act, 2014 provides for a NIT for the state after its bifurcation as the existing NIT went to Telangana.
iv. This bill is presented by the Union HRD Minister Mr. Prakash Javadekar in the Parliament with denoting that In order to make India prosperous the basic sciences and basic research has to be the thrust of higher education as Innovation is the product of research.

Odisha govt forms judicial panel for reforms in Jagannath temple management
i. Odisha government set up a one-member judicial commission to make reforms in the management of the Lord Jagannath temple in Puri.
ii. Former High Court Justice Bimal Prasad Das will be the head of the commission and assisted by former chief administrator of Jagannath Temple Administration (SJTA) Mahimohan Tripathy.
iii. The commission was formed demanding suggestions on well-organized rituals, darshan of deities, security arrangements, training and conservation of heritage and culture in the temple.

IAF plane with 29 people on board goes missing
i. The Antonov An-32 Airforce Plane disappeared after the plane has lost Radar Signal, on the way to the Andaman Nicobar’s Port Blair over Bay of Bengal.
ii. The Airforce Carrier was carrying 29 persons on board lost its Radar signal passing 150 nautical miles on route to Blair from Chennai.
iii. The Plane An-32 is a Russian made one that was inducted in the Indian Air Force Decades back, which can remain flying for a maximum of four and half hours. The Indian Defence forces on full-fledged searching to locate the plane. to curb air pollution from plying in NCR Region.
ii. The Ban will is effective in the National Capital Region that consist of (NCR): Gurgaon, Faridabad, Sonepat, and Jhajjar.
iii. In fact these cities composed together accounts over 20 lakh registered vehicles. i.This move comes after the National Green Tribunal has banned 10 and 15-year-old diesel vehicles in Delhi.

areas of banking soon. This step is adopted by the banker’s bank to enhance the banking experience of the customers.
ii. The five core areas to be monitored by the RBI are:-
♦ Right to privacy,
♦ Right to fair treatment & transparency,
♦ Fair and honest dealing,
♦ Right to suitability and
♦ Right to grievance redress & compensation.
iii. RBI had put out a charter of customer rights in public domain sometime back, asking banks to implement it after their board’s approval.
iv. June 30 has been assigned as the last date for the individual banks to get their boards approved. Now RBI will start monitoring and regulation cum supervision of the banks in all the matters related to the customer rights.

PATA awards 2016 – Kerala Tourism bags two awards for their marketing initiatives
i. Adding to its telling portfolio of citations, Kerala Tourism has secured two Gold Awards at the prestigious Pacific Asia Travel Association (PATA) awards witnessing its trendsetting marketing initiatives to develop the field of tourism.
ii. The two gold medals for ‘Marketing Media’ are in the categories of ‘Travel Advertisement Broadcast Media’ was clinched by ‘Visit Kerala‘ television commercial campaign and ‘E-Newsletter’ was clinched by the popular Kerala Tourism E-Newsletter.
iii. It is noted that this year’s awards attracted 212 entries from 71 organizations and individuals worldwide and these awards will be presented at the PATA Gold Awards Launch on and Presentation on September 9 in Jakarta.
iv. The Visit Kerala commercials which aim to promote domestic tourism – were conceptualized by Stark Communications of Kerala and the Kerala Tourism E-Newsletter is designed by Invis Multimedia.
v. It is also noted that Kerala Tourism was also awarded PATA Gold in the Heritage and Culture category for Muziris Heritage Project. Identification Authority of India (UIDAI). The Union Cabinet approved the promotion of Pandey.
ii. Pandey is a Maharashtra cadre-1984 batch IAS officer. He has been working in UIDAI since last August.
UIDAI
♦ Aadhaar, which is a 12 digit unique number, linked with an individual’s demographic and biometric information used in governments Financial and other Subsidies, Benefits and Services.
♦ UID Board consist of a chairperson, appointed part-time or full-time, two part-time members, and the chief executive officer who shall be member-secretary of the Authority.
♦ 102 crore Aadhaar IDs have been generated as of July 2016.

Aquila – first ever high-altitude solar plane successfully tested by FACEBOOK
i. Facebook has successfully tested the first flight of a high-altitude solar plane to bring internet access to remote parts of the world.
ii. The Aquila drone has the wingspan of an airliner but weighs less than a car. While cruising it consumes just 5,000 watts – the same as three hairdryers or a powerful microwave.
iii. The company ultimately hopes to have a fleet of Aquilas that can fly for at least three months at a time at 18,290 meters and communicate with each other to deliver internet access.
iv. Facebook, which has more than 1.6 billion users, has invested billions of dollars in getting more people online, both through an internet.org and by building drones.
v. Facebook intends Aquila to be part of a fleet of planes that will provide the internet to 4 billion people in sub-Saharan Africa and other remote regions that do not have access currently.

USA in their second game of the America tour in Manheim, Pennsylvania.
ii. Both the teams were goal less in the maiden quarter of the contest with neither able to breach the rival defense and create openings.
iii. The Indians capitalized the game by 1-0. The team has assured the win in the final minute of the third quarter when PreetiDubey scored a goal.