We are here for you to provide the important current affairs April 17 2018 which have unique updates of all daily events from all newspapers such as The Hindu, The Economic Times, PIB, Times of India, India Today, Indian Express, Business Standard, all Government official websites. Our complete current affairs helps you to get more marks in Banking, insurance, UPSC, SSC, CLAT, Railway and all other competitive Exams. 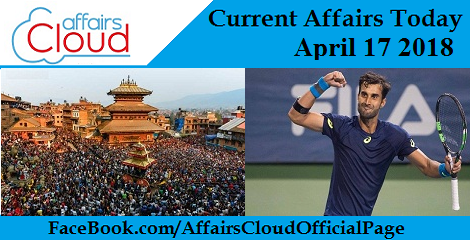 TRAI launches beta portal for comparing telcos’ tariffs
On April 16, 2018, Telecom Regulatory Authority of India (TRAI) unveiled the beta version of a website(http://tariff.trai.gov.in) that contains information about mobile tariffs of all operators for all service areas. 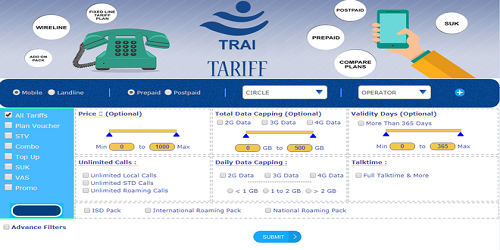 More Information about TRAI’s beta portal for comparing telcos’ tariffs:
i. Objective behind unveiling this portal is to allow users to compare tariffs of different telecom operators and thereby enhance transparency in the industry.
ii. The beta portal which has been unveiled provides information about regular tariffs, special tariff vouchers, value-added service packs and promotional tariffs.
iii. Currently, the beta portal has been launched for the Delhi circle. TRAI will seek feedback from users after 15 days. Users can offer their comments on parameters that have been considered for tariff comparison.
iv. Once it is rolled out across India, this portal would not only benefit the consumers but will also help telecom operators to do a comparative analysis.
Quick Facts about TRAI:
♦ Founded in – 1997
♦ Headquarters – New Delhi
♦ Current Chairman – R S Sharma 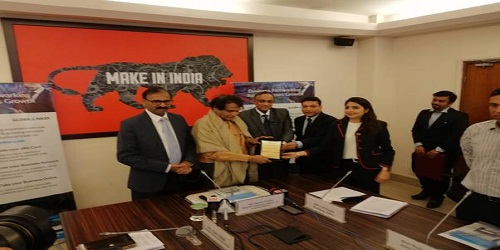 About FIEO’s GlobalLinker:
i. FIEO GlobalLinker is a growing global network, which currently comprises over 140000 SME firms. These firms use their electronic business card and digital profiles created on the platform to seek growth opportunities through business collaboration.
ii. Through this platform MSME exporters can digitise their businesses and thus join a global community of growing businesses
iii. By using FIEO GlobalLinker search and review facilities, exporters can find clients, suppliers and advisors. Through this platform, exporters can even creating a free e-commerce store for direct sales and improved chain management.
iv. In addition to above features, the platform also hosts business articles and industry news, through which, exporters can update their knowledge.
Quick Facts about FIEO:
♦ Set up in – 1965
♦ Set up by – Union Ministry of Commerce
♦ Significance – Has over 25000 members, who contribute more than 70 per cent of India’s exports i. This is Odisha’s second longest bridge and has been built at a cost of Rs. 117.50 crore.
ii. The bridge has enabled direct road connectivity between Sambalpur and Brajarajnagar in Jharsuguda district.
iii. By Commuting through this bridge, distance between these two places is reduced by 50 km.
Quick Facts about Odisha:
♦ Capital – Bhubaneswar
♦ Current Governor – Satya Pal Malik
♦ Current Chief Minister – Naveen Patnaik
♦ Important National Park – Bhitarkanika National Park

Goa to be Developed as Cargo Hub- Suresh Prabhu
Union Minister for Civil Aviation Suresh Prabhu said that, Central government along with state government and private partners is working to promote Goa as a tourism destination and a cargo hub.
Goa to be Developed as Cargo Hub- Suresh Prabhu:
i. Suresh Prabhu said this when he addressed media persons at Dabolim Airport, Goa, after inspection of the renovation work.
ii. He said that, Mopa airport will start operations by September 2020. Dabolim Airport will continue to operate along with Mopa Airport.
iii. At Dabolim airport, renovation work worth Rs 300 crore is being done. New multi-layer parking complex will start operation by July 2018.
iv. Also, at the Dabolim airport, one counter will be allocated to Goa Tourism Department to operate taxi services. Another counter will be allocated to the Goa state government for sale of local products, souvenirs, and vegetables.
v. He said that, transportation of cargo will help farmers to access international market. Also, when Goa gets two airports, passenger handling capacity will increase to 3 crores.
vi. He said that, under the Skill Development and Startup India initiative, Civil Aviation Ministry is in discussion with World Bank and other major institutions to promote Goa as a market destination.
Some Wildlife sanctuaries in Goa:
♦ Cotigao Wildlife Sanctuary
♦ Mhadei Wildlife Sanctuary
♦ Netravali Wildlife Sanctuary

Signature of MoU between the GIFAS (France) and the SIDM (India)
A MoU was signed between the Society of Indian Defence Manufacturers (SIDM), India, and the Groupement des Industries Françaises Aeronautiques et Spatiales (GIFAS), France, to promote a sustainable framework for present and future partnerships and cooperative actions between the French aerospace industry and the Indian defence industry. 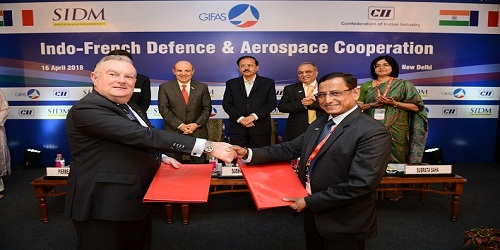 MoU between the GIFAS (France) and the SIDM (India):
i. The MoU was signed during a major industrial mission in India in the aerospace and defence sector, which was organised by GIFAS with the support of SIDM from 16th April to 19th April 2018.
ii. The MoU was signed by Pierre Bourlot, managing director of GIFAS and Lt Gen Subrata Saha, director general of SIDM.
iii. This agreement will work on expanding trade, through better economic and industrial cooperation between France and India and towards export customers.
iii. It will enable implementation of various measures to promote a mutually beneficial cooperation in aerospace and defence manufacturing, research and technology, human capital, engineering services, systems integration.
iv. The cooperation will focus on five axes of common interest. They are:

World Bank to fund community-led landscapes management in Meghalaya
On 16th April 2018, a loan agreement worth USD 48 million for the “Meghalaya Community – Led Landscapes Management Project (MCLLMP)” was signed by India and the World Bank, in New Delhi. 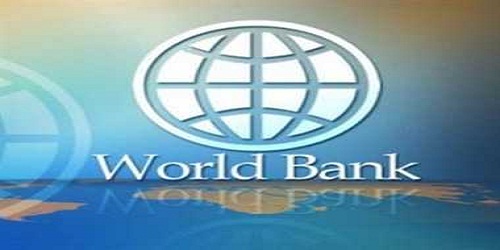 Meghalaya Community – Led Landscapes Management Project (MCLLMP):
i. The objective of this project is to enhance community-led landscapes management in selected landscapes in Meghalaya.
ii. The project has three components:

iii. It will help in managing the depleting natural resources like land, water sources, and forests by strengthening the communities and traditional institutions.
iv. This will increase water for local communities and improve the soil productivity, resulting in increased incomes and lesser poverty.
v. The International Bank for Reconstruction and Development (IBRD) loan agreement was signed by Sameer Kumar Khare, Joint Secretary (MI), Department of Economic Affairs on behalf of India. Hisham A Abdo Kahin, Acting Country Director, World Bank (India) signed it on behalf of the World Bank.
vi. Also, a project agreement was also signed by P. Sampath Kumar, Commissioner and Secretary to the Government of Meghalaya and CEO, Meghalaya Basin Development Authority (MBDA) and Hisham A Abdo Kahin, Acting Country Director, World Bank (India).
vi. The closing date for the above project is 30th June 2023.
Some National Parks in Meghalaya:
♦ Nokrek National Park
♦ Balphakram National Park

India-Wiesbaden Conference 2018 takes place on April 16-17 in New Delhi
On 16th and 17th April 2018, the India-Wiesbaden Conference 2018 was held at the Federation House, Tansen Marg, New Delhi.
India-Wiesbaden Conference 2018:
i. Hosts: The India-Wiesbaden Conference 2018 was hosted by the Ministry of External Affairs, India, along with the Government of Germany and the United Nations Office for Disarmament Affairs (UNODA).
ii. Industry Partner: Federation of Indian Chambers of Commerce and Industry (FICCI) was the industry partner for the event.
iii. Title of the Conference: The Title of the Conference is ‘Securing Global Supply Chains through Government-Industry Partnerships towards Effective Implementation of UNSC Resolution 1540’.
iv. Participation: The Conference saw participation from representatives of Government and Industry of 39 countries, and experts from the UNSC 1540 Committee and UN Office for Disarmament Affairs in New York.
v. The Conference offered an opportunity to share experiences on export control systems for the participants and to identify legal and technical assistance, action plans and challenges in national level implementation of UNSC 1540.
vi. The UN Security Council Resolution 1540 (2004) establishes legally binding obligations on all States to adopt and implement measures to prevent the proliferation to non-State actors of nuclear, chemical, and biological weapons and their delivery systems.
About UN Office for Disarmament Affairs (UNODA):
♦ Under-Secretary-General and High Representative for Disarmament Affairs – Ms. Izumi Nakamitsu
♦ Headquarters – New York, US About Bisket Jatra:
i. Bisket Jatra is a nine-day festival, celebrated annually to welcome the spring and the Nepalese New Year.
ii. The Jatra begins four days before the start of new year.
iii. It is believed that the festival started during Malla dynasty, that ruled Kathmandu from 1201–1769 AD.
iv. As a part of celebration, people of upper and lower part of Bhaktpur engage in a tug of war to pull a three-storey chariot of Lord Bhairavanath on their side. This is the main attraction of Bisket Jatra.
Quick Facts about Nepal:
♦ Capital – Kathmandu
♦ Currency – Nepalese Rupee
♦ Current Prime Minister – Khadga Prasad Oli
♦ Neighbouring Countries – India and China 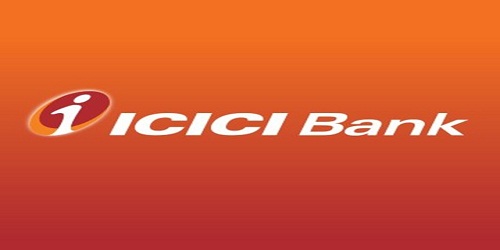 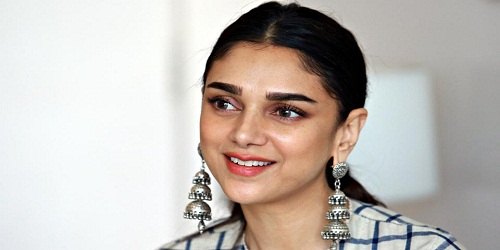 Scientists develop plastic-eating enzyme
Scientists in Britain and the United States have discovered “PETase” an enzyme that can digest some commonly polluting plastics.
PETase:
i. PET (polyethylene terephthalate) is a strong plastic that is commonly used in bottles. It takes hundreds of years to break down in the environment.
ii. The discovery was made by researchers from Britain’s University of Portsmouth and the US Department of Energy’s National Renewable Energy Laboratory (NREL).
iii. The findings were published in the Proceedings of the National Academy of Sciences.
iv. The discovery was made in Japan. Ideonella sakaiensis 201-F6 is a bacterium that uses the plastic as its major energy source.
v. PETase is secreted by Ideonella sakaiensis 201-F6 to digest plastic. The enzyme is able to digest PET (polyethylene terephthalate).
Some important museums in India:
♦ Kirti Mandir – Porbandar, Gujarat
♦ Kutch Museum – Bhuj, Gujarat
♦ Maharaja Fateh Singh Museum – Vadodara, Gujarat

Tennis rankings: Yuki Bhambri back in top-100 after more than 2 years
On 16th April 2018, Yuki Bhambri entered into the top-100 ATP men’s singles ranking with a rank of rank 83, for the first time since February 2016. 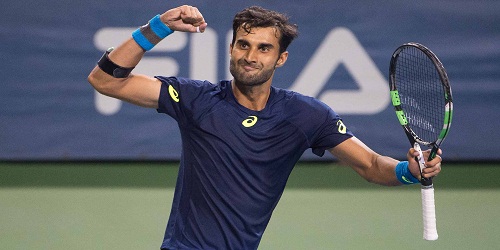 Yuki Bhambri back in top-100:
i. Yuki Bhambri has improved 22 places and has reached rank 83, which is considered his career best.
ii. This is the best rank an Indian has obtained in ATP singles ranking, after Somdev Devvarman reached rank 62 in 2011.
Other Indian rank holders:
iii. Ramkumar Ramanathan has reached his career-best rank of 116. He was Yuki Bhambri’s Davis cup teammate.
iv. Sumit Nagal has been ranked 215. He is followed by Prajnesh Gunneswaran at 266 and Arjun Kadhe at 394.
Doubles ranking:
v. Divij Sharan has improved to rank 41. Leander Paes has secured 49th position. Rohan Bopanna is at rank 19.
Women’s Ranking:
vi. Ankita Raina has secured 194th rank. Karman Kaur Thandi is at 268th rank.
vii. Sania Mirza remains at 24th rank in the women’s ranking.
About Association of Tennis Professionals (ATP):
♦ Executive Chairman & President – Chris Kermode
♦ Purpose – governing body of the men’s professional tennis circuits – the ATP World Tour, the ATP Challenger Tour and the ATP Champions Tour