We are here for you to provide the important Current Affairs November 19 2018, which have unique updates of all daily events from all newspapers such as The Hindu, The Economic Times, PIB, Times of India, PTI, Indian Express, Business Standard and all Government official websites. 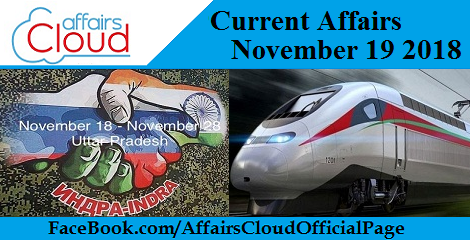 10th Indra 2018: India, Russia joint military exercise held in Jhansi, UP
On November 18, 2018, the 10th joint military exercise between Indian and Russia– EXERCISE INDRA, under the United Nations (UN) started at Babina Field Firing Ranges, Babina Military Station, in Jhansi in Uttar Pradesh.
This exercise will continue for 11 days and it will expect to finish on November 28, 2018. Objective:
On combating insurgency.
Key Points:
i. Participants in the training exercise include:

ii. It will focus on:

Kerala launched new open online learning programme – ‘KOOL’
On November 18, 2018, the Kerala Infrastructure and Technology for Education (KITE) unveiled its Online Open Learning training platform named- KOOL.
i. It will enable training to teachers, students and the general public and the first batch will commence from December 2018.
ii. It will be used under a MOOC (Massive Open Online Course) model, which will enable the state’s schools to go Hi-Tech.
iii. This will help Kerala to become India’s first complete digital state in Education.
iv. The state government is yet to approve KOOL Certificate acceptable for declaring the probation of teachers.
About its features:
i. KOOL has been developed as an expansion of ‘Samagra’, the resource portal of the education department.
ii. It will have materials in the form of animated learning assistants, video tutorials and checklists for practicing the activities.
iii. The 6 week course includes creation of word documents, spreadsheet, presentation, image editing, video-audio editing, development of digital resources, Malayalam typing, internet, educational applications.
iv. It will have 200 mentors with a capacity to train 4,000 persons at a time.
v .It will be compulsory for teachers to successfully complete 45 hours of computer course in order to clear their probation.
vi. The first batch of KOOL will include 2,500 teachers in the proportion of one mentor for every 20 teachers.
vii. Teachers upon completion of the complete course would be awarded certificates.
Kerala:
♦ Capital: Thiruvananthapuram.
♦ Chief Minister: Pinarayi Vijayan.
♦ Governor: Palanisamy Sathasivam.
♦ National Parks: Periyar National Park, Silent Valley National Park, Pampadum Shola National Park, Mathikettan National Park, Eravikulam National Park, Anamudi Shola National Park.

3-day 6th Indian Social Work Congress held in New Delhi
On November 1, 2018, the 3-day 6th Indian Social Work Congress commenced in New Delhi.
It continued till November 3, 2018.
i. It was jointly organized by National Association of Professional Social Workers in India (NAPSWI) and Department of Social Work (Delhi School of Social Work) University of Delhi.
ii. The theme of the 2018 Congress was “Human Development and Social Inclusion: Imperatives for Social Work Education and Practice”.
iii. The objective of the initiative is to bring about social fraternity to discuss the issues of social work, education and research in India.
iv. In this edition,Dr. Martha Farrell was posthumously honoured with Lifetime Achievement Award for her lifelong work towards gender equality women’s empowerment and prevention of sexual harassment at workplace.
Background:
♦ The Indian Social Work Congress is an initiative of the National Association of Professional Social Workers in India (NAPSWI).
♦ The congress was first held in 2013.

Africa’s First Ever High Speed Train Line unveiled in Morocco
On November 18, 2018, Morocco‘s first high-speed rail line, the first ever such line in Africa was unveiled.

i. It was inaugurated by French President Emmanuel Macron and Morocco’s King Mohammed VI.
ii. It is known and LGV and will connect the economic hubs of Tangier and Casablanca in 2 hours 10 minutes.
iii. The cost of the project was $2 billion project and was launched in September 2011.
Morocco:
♦ Capital: Rabat.
♦ Currency: Moroccan dirham.

Sunil Mehta committee incorporated ‘Sashakt India AMC’ for large NPAs over 500 crore rupees
On November 18, 2018, the Sunil Mehta committee released the statement for formation of an asset management company (AMC) for resolving large bad loans.
i. The name of the AMC is: Sashakt India Asset Management.
ii. It was announced by Sunil Mehta, the chairman of a bankers’ panel working on faster resolution of stressed assets in public sector banks on the sidelines of a CII-CFO summit held in Mumbai.
iii. The company will follow a five-pronged strategy under Project Sashakt to tackle stress in the banking sector.
iv. Under the project, the following will happen:

Background:
About 200 bad loan accounts have been identified which owe more than Rs 500 crore each to banks at present, with a total exposure of about Rs 3.1 lakh crore. 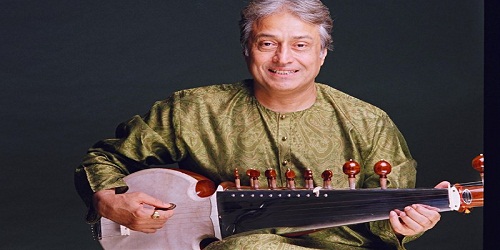 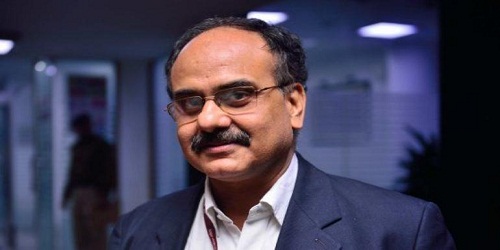 i. He would replace Hasmukh Adhia — the Gujarat-cadre IAS officer who is set to retire on November 30.
ii. He currently holds the position of  Chief Executive Officer (CEO) of Unique Identification Authority of India (UIDAI) and Goods and Services Tax Network (GSTN) Chairman. After the appointment he will continue to hold these positions.
Other News:
i. ACC also appointed Girish Chandra Murmu as the Expenditure Secretary.
ii. He will replace Ajay Narayan Jha who will retire on January 31 2019.
iii. He is currently the Special Secretary at Revenue Department.
iv. Additionally, it also appointed N Sivasailam, special secretary in the Department of Telecommunications as special secretary (Logistics), Department of Commerce.
Finance Ministry:
♦ Union Minister: Shri Arun Jaitley.
♦ Minister of State: Shri Shiv Pratap Shukla, Shri Pon. Radhakrishnan.
UIDAI:
♦ Headquarters: New Delhi.
♦ Chairman (Part time): Shri. J Satyanarayana.

Myntra to merge with Jabong ; Narayanan to continue as CEO
On November 18, 2018, Myntra revealed plans to integrate its sister firm, Jabong with itself. 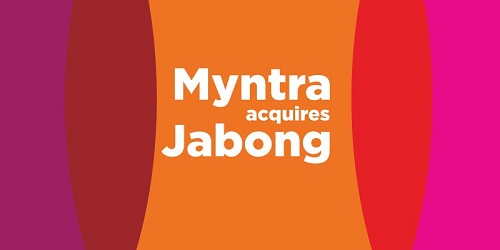 i. The integrated firm will continue to be led by Myntra CEO Ananth Narayanan.
ii. Post the merger, the companies will continue working as separate brands.
iii. Narayanan would report to Flipkart chief executive Kalyan Krishnamurthy after the exit of group CEO Binny Bansal.
Background:
Flipkart had acquired Myntra in 2014 and Myntra had acquired Jabong in 2016.

8th Asian Shotgun Championship in Kuwait
8th Asian Shotgun Championship held from 3rd November to 11th November in Kuwait.
i. Angad Vir Singh Bajwa has became the first Indian skeet shooter to win a gold. He set a world record with a shot of perfect 60 out of 60 in final round.
ii. He defeated China’s Di Jin who shot 58 in the final round. Saeed Al Maktoum of UAE won the bronze medal with a score of 46.
iii. China Topped the Medal Tally by winning 19Medals,Kazakhstan followed it by winning 14 Medals.India won a Single gold medal in the event.
About Asian Shooting Confederation:
♦ President:Sheikh Ali Al Khalifa
♦ HeadQuarter:Kuwait. 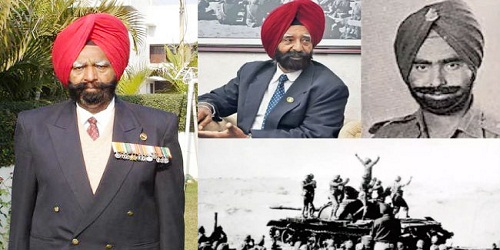 i. He was known as the hero of the Battle of Longewala during the 1971 Indo-Pak war.
ii. He was a recipient of the Maha Vir Chakra — the country’s second-highest gallantry award — for his role at Longewala.
iii. He served in the United Nations Emergency Force (UNEF) for about a year.
iv. He also served twice as an instructor at the Infantry School, Mhow.
Background:
Kuldip Singh Chandpuri defended a border post in Rajasthan with just 120 Indian soldiers during the 1971 war against around 2000 Pakistani soldiers who were backed by more than 40 tanks.

Mardal maestro in Odisi music Banamali Maharana passed away
On November 18, 2018, eminent percussionist Banamali Maharana passed away at 77 in Odisha.
i. He was known for playing ‘mardala’ in Odissi music and dance across the globe.
ii. He was previously honoured with the prestigious Orissa Sangeet Natak Akademi Award in 1994, Kendriya  Sangeet Natak Akademi Award in 2004 and the Kabi Samrat Upendra Bhanja Sanman in 2016.
iii. He founded the Mardala Academy  in Bhubaneswar, which organizes ‘Tala Vadya Utsav’.

Key Points
i. Earlier,She had worked as a professor of Neurosurgery in Madras Medical College and retired in 1990 and inspired women from all over the nation to make career in the field of Neurosurgery.
ii. She was born on March 31, 1932 and raised in Chennai.
iii. Deep Brain Stimulation was one of the area of interests of Dr. T.S. Kanaka. 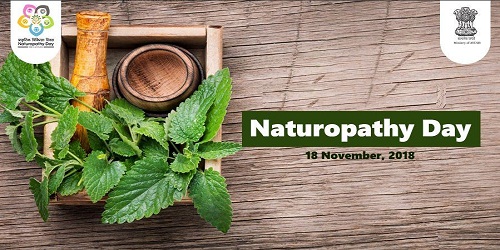