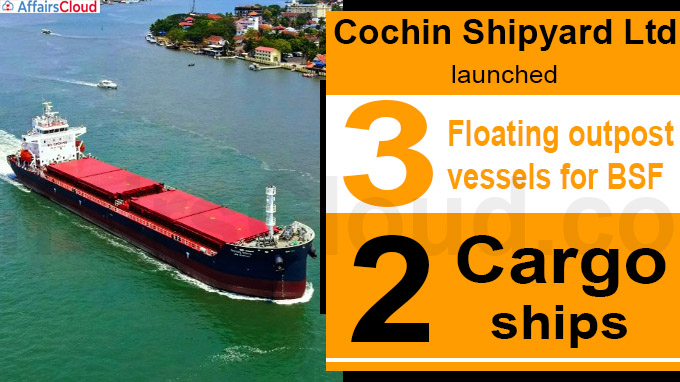 Launch of Vessels by CSL

i.The 3 FBOPs designed & built indigenously by CSL for BSF will act as Strategic base stations at the borders. They will be deployed on the Eastern & Western borders and will strengthen BSF’s water wing.

ii.The 2 Mini General Cargo Ships have a dead-weight tonnage of 8,000 each.

Indian Air Force (IAF) formally inducted the Rafale Aircraft into the 101 Squadron (The squadron is titled as ‘Falcons of Chamb and Akhnoor’) of the Eastern Air Command (EAC) at Hasimara Air Force, West Bengal.

In September, 2016, India & France signed an Inter-Governmental Agreement with France to procure 36 Rafale Aircrafts at a cost of INR 59,000 crores.

February 24, 2021, CSL emerged as the Lowest Bidder in a tender floated by the Ministry of Defence for construction of 6 Next-Generation Missile Vessels (NGMV) to be utilized by the Indian Navy.