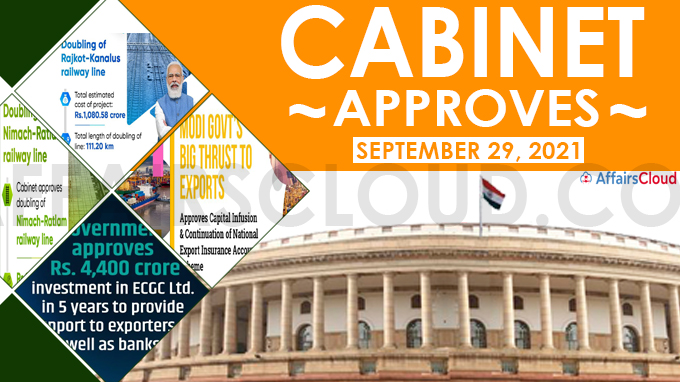 The government has approved the continuation of the National Export Insurance Account (NEIA) scheme with the contribution of Grant-in-aid of Rs 1,650 Crore over a period of 5 years, i.e. from FY22 to FY26.

i.NEIA Trust was established in 2006 to promote project exports from India that are of strategic and national importance.

ii.It promotes Medium and Long Term (MLT) /project exports by extending (partial/full) support to covers issued by ECGC to MLT/project export made and to Exim Bank for Buyer’s Credit (BC-NEIA) tied to project exports from India.

iii.It will help the Indian Project Exporters (IPE) to use the potential of project exports in the focus market.

i.The corpus commitment of GOI is Rs 4000 crore and Maximum Liability Permissible is 20 times of the actual corpus.

ii.As of March 31, 2021, it has received contributions of Rs 3,091 crore from the Government of India over the years.

iii.Since its establishment, NEIA has extended 213 covers, with a consolidated project value of Rs 53,000 crores to 52 countries as of 31st August 2021. Its impact in enabling project exports has been most significant in Africa and South Asia.

The cabinet has approved the doubling of the Nimach-Ratlam railway line in Madhya Pradesh at a total estimated cost of Rs 1,095.88 crore and completion cost is Rs.1,184.67 crore.

The Union Cabinet approved the doubling of the Rajkot-Kanalus railway line in Gujarat at a total estimated cost of Rs 1,080.58 crore and its escalated / completion cost is Rs.1,168.13 crore.

Approved listing of ECGC through IPO on stock exchanges:

The Cabinet Committee on Economic Affairs chaired by PM Narendra Modi has approved the listing of ECGC (Formerly known as Export Credit Guarantee Corporation Ltd.), an unlisted Central Public Sector Enterprises (CPSE) through the Initial Public Offer (IPO) on the Stock Exchange under the SEBI’s (Issue of Capital and Disclosure Requirements) Regulations, 2018.

i.ECGC Ltd is a wholly-owned CPSE of the Government of India set up to improve the competitiveness of the exports by providing Credit Risk Insurance and related services for exports.

iii.The listing would enable ECGC to mobilize fresh capital from the market either through the same IPO or a Follow-on Public Offer (FPO).

The Government approved capital infusion of Rs 4,400 crore to ECGC Ltd. (formerly known as Export Credit Guarantee Corporation of India Ltd.) over a period of 5 years, i.e. from FY22 to FY26.

i.The capital will be infused in instalments thereby increasing the capacity to underwrite risks up to Rs 88,000 crore.

ii.The capital infusion will enable ECGC to issue covers that can support additional exports of Rs 5.28 lakh crore over the 5-year.

Note – As per the report of the World Bank (WB) and International Labour Organisation (ILO), ‘Export to Jobs’ in February 2019, Rs 5.28 lakh crore exports will lead to the formalization of 2.6 lakh workers and the total number of workers (both formal and informal) will increase by 59 lakhs.

i.ECGC had an 85 percent market share in the export credit insurance market in India and it supported Rs.6.02 lakh crore exports in FY21, which is around 28 percent of India’s merchandise exports.

ii.As of March 2021, 7,372 exporters were benefited through ECGC and 9,535 were benefited under Export Credit Insurance for Banks 97 percent of which are small exporters.

iv.ECGC has a database of over 5 lakh overseas buyers and it has settled claims of more than Rs 7,500 crore in the last decade.

v.It has invested $ 11.7 million in Africa Trade Insurance (ATI) so as to facilitate Indian exports to the African market.

So far, the scheme has covered all school children studying in Classes 1st to 8th of around 11.80 crore children in 11.20 lakh government and Government-Aided Schools.

vi.The scheme is continuing to follow the 60:40 split in expenses by the Centre and states.

Note – Mid Day Meals scheme in School was first started in 1995 as an initiative to improve enrolment in schools.

In August 2021, the cabinet approved the ratification of the Kigali Amendment for phase-down of Hydrofluorocarbons (HFCs) by India under the Montreal Protocol to prevent greenhouse gas emission.

About Ministry of Education: