Assam Witch Hunting (Prohibition, Prevention and Protection) Bill, 2015 has been passed by the Assam state assembly that any person making any offence under the Act as non-bailable, cognizable and non-compoundable to eliminate rising cases of superstition leading to murder of so-called “witches“. 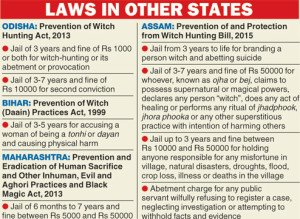 • The individual will be jailed for seven years and fined up to Rs 5 lakh for identifying and calling a person a “witch”, as per the new bill.
• The bill said that sentence of 3 years imprisonment will be given if anybody blames a person for natural disasters in a particular locality such as droughts, floods, illness or any death.
• This will be clubbed with a murder charge of Section 302 as per the Indian Penal Code if someone is killed as a result of this superstition.
• The Bill also talked about various measures that the administration and police need to initiate along with NGOs and civil society to educate people about witch hunting.
• Special courts will be set up in consultation with the high court for trial of offences.
• Assam government will also provide free medical assistance to the victims of witch hunting as Hundreds of cases of torture and killing have been reported in the state in the name of witch.