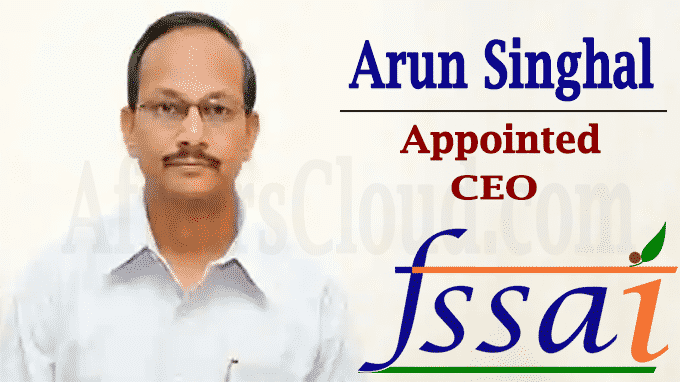 On May 29,2020, The Appointments Committee of the Cabinet (ACC), Government of India (GoI), has approved the appointment of Arun Singhal, a 1987-batch IAS (Indian Administrative Service officer) of Uttar Pradesh cadre, as chief executive officer (CEO) of Food Safety and Standards Authority of India (FSSAI).

i.Mr Singhal, currently serving as Special Secretary in the Department of Health and Family Welfare, will succeed GSG Ayyangar.

ii.The decision comes after former FSSAI chief Pawan Kumar Agarwal, a 1985 batch IAS officer of West Bengal cadre, who was recently appointed as special secretary logistics, after serving as consumer affairs secretary, moved out of the position earlier in 2020.

ii.Rajendra Kumar, who was recently made the Director General of Employees State Insurance Corporation (ESIC), has been appointed as additional secretary in the Ministry of Information Technology in place of Gopalakrishnan.

iii.C. Sridhar, a 2001 batch IAS of Bihar cadre,  has been made Joint Secretary in the Prime Minister’s Office. Currently he is the Deputy Director of Lal Bahadur Shastri National Administrative Academy (LBSNAA) of Mussoorie (Uttarakhand).