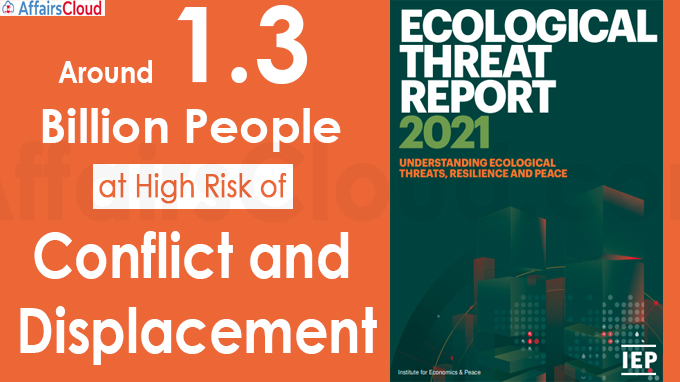 On October 7, 2021, the 2nd edition of ‘Ecological Threat Report (ETR) 2021: Understanding ecological threats, resilience and peace’ was released by the Institute of Economics and Peace (IEP). As per it, around 1.26 billion people across 30 countries are suffering from both extreme ecological risk and low levels of resilience.

The ETR 2021 has assessed data from over 2,500 sub-national administrative units in 178 countries. It was related to food risk, water risk, rapid population growth, temperature anomalies and natural disasters.

Key findings of the report are:

iv.11 countries are projected to double their population between 2021 and 2050. They are all in sub-Saharan Africa.

In September 2021, International Labour Organization (ILO) released its flagship report on social protection named ‘World Social Protection Report 2020-22: Social protection at the crossroads – in pursuit of a better future’. As per the report, half of the global population i.e. 53 percent (4.1 billion) did not have any kind of social security.

About Institute for Economics and Peace (IEP):