India batsmen, Ajinkya Rahane and Rohit Sharma were awarded with the prestigious Arjuna Award for 2016 and 2015 respectively, at the Jawaharlal Nehru Stadium in New Delhi.

The Arjuna Awards are given by the Ministry of Youth Affairs and Sports, government of India to recognize outstanding achievement in National sports.

From the year 2001, the award is given only in disciplines falling under the following categories: 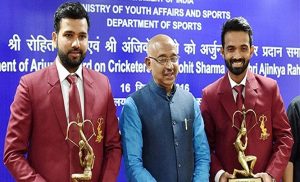 Ajinkya Madhukar Rahane is an international cricketer who represents India and is the vice captain in the Test format of the game. He is a right-handed batsman who made his international debut in a Twenty 20 International against England at Manchester in August 2011 and made his Test debut against Australia in March 2013.

Rohit Gurunath Sharma is an Indian cricketer. He is a right-handed batsman and an occasional right-arm off break bowler who plays for Mumbai in domestic cricket. He is the captain of the Mumbai Indians in the Indian Premier League.