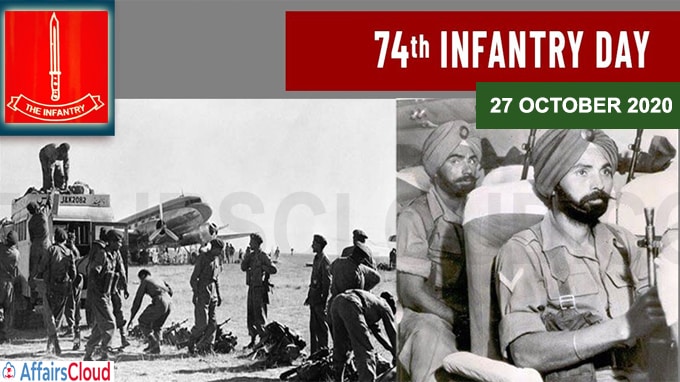 Indian Army annually celebrates the Infantry Day on 27th October to commemorate the courage and sacrifice of the Infantrymen who fought in the first military event of India after independence on 27th October 1947 against Pakistan intruders in Kashmir. The day also honours all the martyrs of India.

For the first time, All the top commanders and Colonels of the Regiments of Indian Army paid tribute to the Infantrymen at the National War Memorial(NWM) in Delhi.

This day is also marked as the Kumaon Regiment and Sikh Regiment day.

i.The day marks the first military event of the Independent India on 27th October 1947 when Pakistan made the first attack on the Indian Soil in Kashmir valley.

ii.The then princely state of Jammu & Kashmir was attacked by the tribal raiders supported by the Pakistan army.

iii.The two indian infantry companies, the first battalion of sikh regiment and 13 Kumaon landed at the Srinagar airbase and won the battle to liberate the Kashmir valley from the intruders.

ii.At the ceremonial duties at NWM, 13 Kumaon Regiment was deployed, who are from the same regiment that fought the last man round at the Battle of Rezang la against China’s People’s Liberation Army(PLA) in 1962.