The 5th Conference on Interaction and Confidence Building Measures in Asia (CICA) Summit 2019 was held in Dushanbe, Tajikistan, from 14-15 June 2019. The theme of the 5th Summit was “Shared Vision for a Secure and More Prosperous CICA Region”. India is a member of CICA since 1999. Late Prime Minister Shri Atal Bihari Vajpayee had participated in the first CICA Summit held in 2002 in Almaty, Kazakhstan. 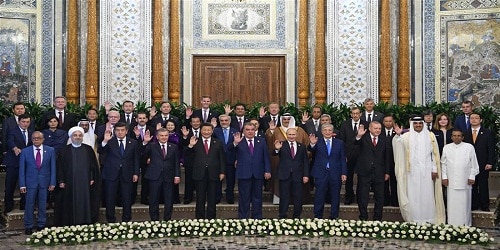 External Affairs Minister addressed the gathering at 5th CICA Summit 2019
External Affairs Minister Dr S. Jaishankar addressed the gathering at 5th CICA Summit 2019. Following are the highlights:
i. Terrorism is the gravest threat to the people in Asia. CICA members are its victims. Terrorists and their victims must never be equated.
ii. CICA has always shown a strong commitment to combat terrorism and extremism and to adopt a comprehensive strategy to combat terrorism.
iii. Support was seeked for the early finalisation of the Comprehensive Convention on International Terrorism (CCIT) which was proposed by India.
iv. He assured that India will continue to actively participate in the CICA Processes.
v. India-Central Asia 5 Ministerial dialogue will enhance further cooperations and stability across regions and he assured that India will always support regional connectivity initiatives.

India’s Foreign Minister pitched for rules-based order in Asia and the world at large
While addressing at 5th CICA Summit 2019, India’s Foreign Minister Dr S Jaishankar pitched for rules-based order in Asia and world at large amid emerging geo-political and geo-economic faultlines. He stated that CICA can surely play a useful role in promoting peace, security and development in Asia. He assured India’s support to a rule-based order in Asia but confronted unavoidable challenges such as terrorism, conflicts, trans-national crimes and maritime threats. Indicating India as the link between Eurasia to Indian-Pacific Oceans, the Minister pointed out that it is rooted in advocacy of SAGAR- Security and Growth for All in the Region. The issues of sustainable development including the lack of energy security, low intra-regional trade and deficit of connectivity should be sorted out.

Other Meetings
i. External Affairs Minister Dr S. Jaishankar met A K Abdul Momen, Minister of Foreign Affairs of Bangladesh and Foreign Minister of Bahrain, Shaikh Khalid Bin Ahmed Bin Mohamed Al Khalifa and had conversations with them. He reviewed the recent progress made in bilateral ties with the respective countries.
ii. He met Iranian counterpart Javad Zarif and discussed issues of mutual interest. Meeting was held against the backdrop of the US sanctions on Iran and Tehran’s partial withdrawal from the Joint Comprehensive Plan of Action (JCPoA).
iii. He also met President of Tajikistan, Emomali Rahmon and held talks with him.
iv. He met Vietnam’s Vice President Dang Thi Ngoc Thinh and discussed various aspects of India-Vietnam relations.
About CICA:
♦ Established: September 14, 1999
♦ Secretariat: Nur-Sultan, Kazakhstan