Five Indian Americans, hailing from a Minority Ethnic Community which is just 1 percent of the entire US population, have created history as they took oath as US Congress Members.

1.Kamala Harris: The 52-year-old Harris was sworn-in as the Senator from California on January 3, 2017,  by the outgoing US vice President Joe Biden. She is the first Indian American to serve the Senate. She hails from a family where her mother is an Indian and her father is from Jamaica of African heritage.Before the appointed, Harris served as the Attorney General of California. 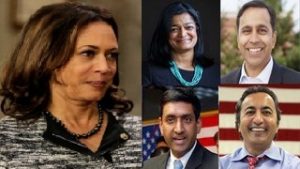 3.Ro Khanna: 40-years-old Khanna representing Silicon Valley was sworn in on a bicentennial edition of the Constitution on loan from the rare books division of the Library of Congress.

American politician, Paul Ryan was re-elected on January 3, 2017 as speaker of the House of Representatives by the US lawmakers for the 115th session of the Congress.

Lighthizer is an American lawyer who served as deputy U.S. trade representative under former Republican President Ronald Reagan in 1980s. Nearly after three decades the US lawyer has been appointed as the chief trading negotiator.