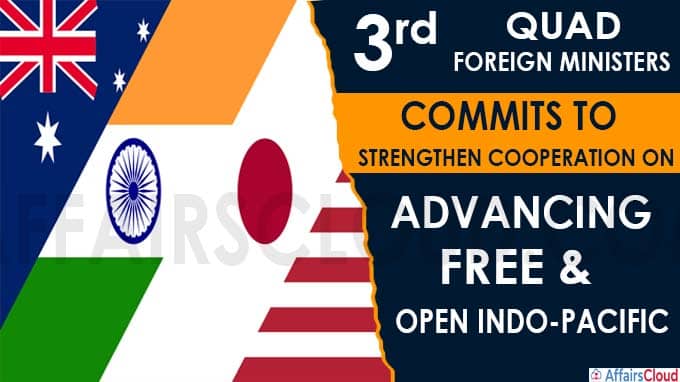 –Discussions were held on COVID-19 response and climate change and to address these global challenges.

–They also discussed countering disinformation, counterterrorism, maritime security, the urgent need to restore the democratically elected government in Myanmar, and the priority of strengthening democratic resilience in the broader region.

–They reaffirmed their mutual support for ASEAN (Association of Southeast Asian Nations) centrality.

–They also expressed their commitment in enhancing access to affordable vaccines, medicines and medical equipment.

–Notably, India’s efforts at providing vaccines to 74 countries were appreciated at the meeting.

This meeting is the continuation of the views that were exchanged in the 2nd QUAD meeting of October 6, 2020 that was held in Tokyo. The first meeting of Quad was organized in the year 2019 in New York.

i.On January 23, 2021, the 19th meeting of the Joint Steering Committee (JSC) on India Bangladesh cooperation in the energy sector was held in Dhaka, Bangladesh where Indian delegation was led by the Power Secretary Sanjiv Nandan Sahai while Power Secretary Md. Habibur Rahman represented the Bangladesh side.

In 2017, the above mentioned four countries approved the proposal of setting up the “Quad” or the Quadrilateral coalition to counter China’s aggressive behaviour in the Indo-Pacific region.