On June 21, 2019, the 35th Goods and Service Tax (GST) Council Meeting was held in New Delhi. It was chaired by the Union Finance & Corporate Affairs Minister Smt. Nirmala Sitharaman and it was her first meeting after assuming the office. It was attended by the Union Minister of State for Finance & Corporate Affairs Shri Anurag Thakur, Revenue Secretary Shri Ajay Bhushan Pandey, Finance Ministers of States & Union Territories, Senior officers of the Ministry of Finance and State Governments. 12 Agenda items were discussed during the Council meeting. 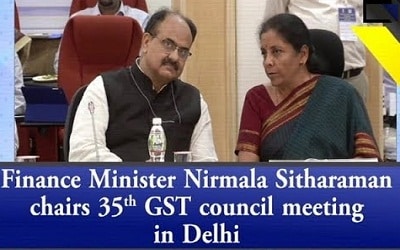 Highlights of the Meeting
Introduction of Aadhaar-enabled GST Registration
In order to ease the current process of GST registration and reduce the paperwork involved, GST Council introduced a new system for verification of taxpayers registering themselves under GST. Aadhaar number shall be linked to the GSTIN while generation. No other documents are required and authentication will be done using One Time Password (OTP).

NAA tenure extended by two years
Tenure of National Anti-profiteering Authority (NAA) was due to end by 30 November 2019. GST Council extended this tenure by two years, in order to enable it to take up all the pending cases. The authority can take up new cases in future due to rate cut issues, indicating that the GST Council has plans for further rationalisation of GST rates.

E-invoicing to start from January 2020
The Council decided to introduce electronic invoicing system in a phase-wise manner for B2B (Business to Business) transactions from 1 January 2020. Using this system, no separate e-way bill will be required in case of e-invoice. It will help to combat the menace of tax evasion.

E-ticketing made mandatory for multiplexes
Council approved the electronic ticketing system, for multiplexes, having multi-screens. This will help curb cases of tax evasion and the use of black tickets that have been prevalent.

Rate cut decision on electric vehicles, chargers & leasing
The decision to cut GST rates for electric vehicles (to 5% from 12%) and electric chargers (to 12% from 18%) were postponed to the next Council meeting. The matter was referred to the Fitment Committee for checking the feasibility of the rate cut.

Rate cut for lottery put on hold
Group of Ministers (GoM) on Lottery submitted its report to the Council. After deliberations on the various issues on rate of lottery, the Council recommended that certain issues relating to taxation (rates and destination principle) would require legal opinion of Learned Attorney General.

GSTAT to be GST Appellate Tribunal
The GST council stated that Goods and Service Tax Appellate Tribunal (GSTAT) will be the appellate authority and will adjudicate on appeals arising from central and state tax authorities’ in-house dispute resolution system. The states will decide the number of GSTAT required by them as a result of which there can be two tribunals in a single state. It was decided to have a common State Bench for the States of Sikkim, Nagaland, Manipur and Arunachal Pradesh.

For non-filing of GST returns, E-way bills to be blocked
The law stated that where the GST returns in GSTR-3B/ GSTR-4 is not filed for two consecutive tax periods, e-way bill generation for such taxpayers would be disabled with effect from 21 August 2019, instead of the earlier notified date of 21st June 2019.

Changes in laws and procedures