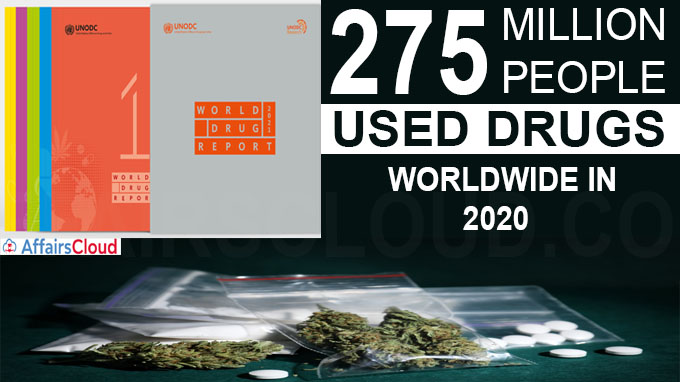 On June 24, 2021, the United Nations Office on Drugs and Crime’s (UNODC) released a World Drug Report 2021 which states that around 275 million people used drugs worldwide in 2020 of which 36.3 million people or 13% suffered from drug use disorders.

i.According to the latest global estimates, about 5.5% of those between 15 and 64 have used drugs at least once in 2020.

ii.Globally, over 11 million people are estimated to inject drugs, half of whom are suffering from Hepatitis C.

iii.There was a rise in the use of cannabis during the coronavirus pandemic. This rise was analysed by the survey of health professionals across 77 countries of which 42% agreed with the increased use of cannabis.

iv.Opioids contribute to the largest burden of disease due to drug use.

v.The year 2020 also marked a rise in the non-medical use of pharmaceutical drugs.

ii.The number of cannabis users has increased by nearly 18% over the past decade.

iii.Fentanyl and its analogues resulted in most of the deaths.

Reasons behind this increase:

i.COVID-19 crisis: The COVID-19 crisis in 2020 resulted in 255 million job losses while 100 million people pushed into extreme poverty worldwide. This caused a rise in Mental health conditions too resulting in a spur in drug use and rise in drug use disorders.

i.The launch of the 2021 World Drug Report comes ahead of the International Day Against Drug Abuse and Illicit Trafficking, observed on June 26, 2021 with the theme “Share facts on drugs, save lives”.

About United Nations Office on Drugs and Crime(UNODC):