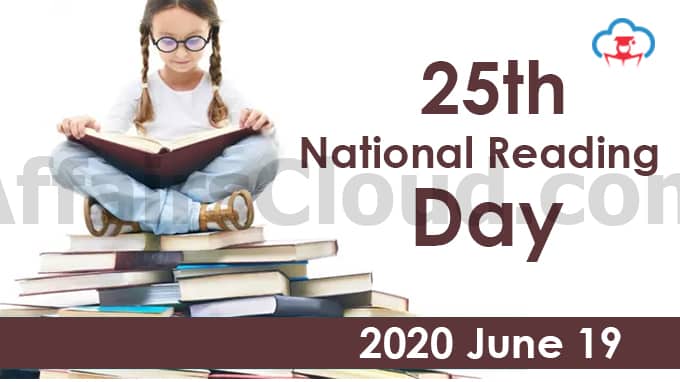 On June 19, 2020 India celebrated the 25th edition of the National Reading Day to honour Kerala’s Father of Library Movement, Puthuvayil Narayana(P.N.) Panicker & his significant contribution to the reading culture which made Kerala’s universal literacy rate (100%) in 1990. The day aims to encourage reading among students across the country.

i.As per the notice released by The Central Board of Secondary Education (CBSE) on June 16, the 25th National Reading Day will be celebrated with a special attention on technology-driven reading.

ii.P.N. Panicker Foundation has initiated various online reading related activities, which include: Quiz, Open Art and Essay Writing and Debate Competition for the students; Quiz and video book competition for the faculty members and Librarians.

Facts about the day

i.P.N.Panicker as a teacher started the Sanadanadharmam Library in Kerala in 1926.

ii.He was the key person for establishing the Travancore Library Association or Thiruvithaamkoor Granthasala Sangham in 1945 with 47 rural libraries. The association’s slogan- ‘Read and Grow’.

iii.Later, when the state of Kerala was formed in 1956, it became the Kerala Granthasala Sangham (KGS). The association won the ‘Krupsakaya Award’ from UNESCO in 1975.

iv.He served as the General Secretary of the association for 32 years till 1977, when the association was taken over by the State government, and became the Kerala State Library Council.