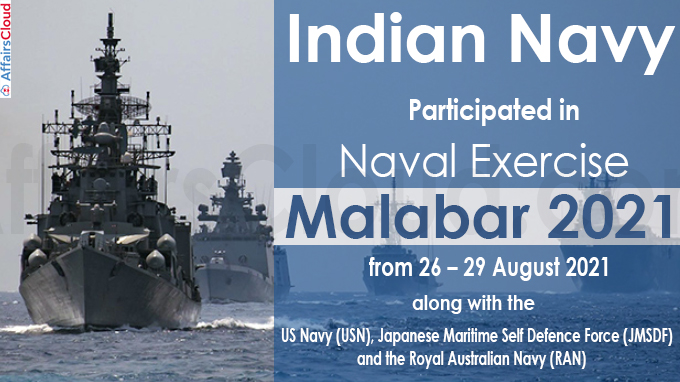 The 25th Edition of Naval Exercise Malabar is conducted between the India Navy, the United States (US) Navy, Japanese Maritime Self Defence Force (JMSDF) & the Royal Australian Navy (RAF) in the Western Pacific Ocean. The exercise is hosted by the US Navy from 26th-29th August, 2021.

i.The Malabar Started is an annual bilateral exercise started in 1992 between the Indian Navy & the US Navy.

ii.Then it became a trilateral exercise, After Japan joined as the permanent member of the exercise in 2015.

iii.In the 2020 edition, Australia participated in the exercise malabar.

In July 2021, The 12th Edition of Biennial bilateral maritime Exercise ‘INDRA Navy-21’ was held between the Indian Navy & Russian Federation Navy in the Baltic Sea.