The 23rd session of the United Nations World Tourism Organization’s (UNWTO) General Assembly for 2019 was held in Saint Petersburg, Russia from September 9-13, 2019. UNWTO is the leading international organization in the field of tourism. 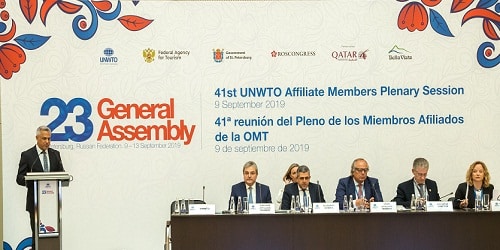 15th edition of the UNWTO Awards:
The 15th edition of the UNWTO Awards marked the launch of the Accessible Tourism Destinations (ATD) initiative, organized by UNWTO in partnership with the Spanish NGO ONCE. Awards were given to the following:
i. San Sebastian, a Spanish city, was awarded the 2019 UNWTO prize for Public Policy and Governance 2019 for the initiative “Love San Sebastian, Live Donastia”.
ii. In the Enterprises category, it was given to “Community Impact by V Resorts”, an initiative of V Resorts under the aegis of Bliss Inns Ltd, India.
iii. Fundación Once from Spain was awarded Best Non-Governmental Organization (NGO) 2019.
iv. Turismo Portugal was awarded the first international distinction of Accessible Tourism Destination (ATD) 2019.
v. Destino Barcelona (Spain) was awarded a special mention award as an exceptional urban tourism destination.
vi. Thrissur in Kerala, India received a special mention award as an emerging destination on the global accessible tourism market.

UNWTO Tourism Video Competition 2019
It was the 4th edition of the UNWTO Tourism Video Competition 2019. It had 2 categories: Outstanding Country Promotional Videos and Exceptional Stories of Sustainable Tourism. Following are the awardees:
i. Chile won the award for Exceptional stories of sustainable tourism.
ii. Awards for Outstanding Country Promotional Videos were presented to: Tunisia from the African region, Mexico from both North and South America combined, India from Asia & Pacific Region, Greece and Portugal from Europe, and Egypt from the Middle East.
iii. India’s ‘Yogi of the Racetrack’, a short promotional film on Yoga produced by the Union Ministry of Tourism, was conferred ‘Best Video’ award 2019 for the Asia & Pacific Region.