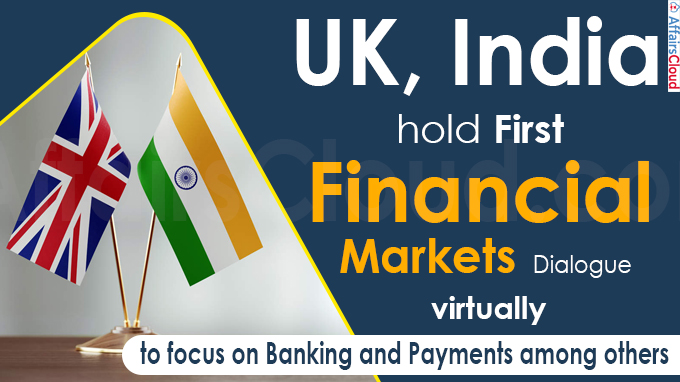 On July 8, 2021, the 1st meeting of the United Kingdom (UK)-India Financial Markets Dialogue (FMD) was held virtually to deepen bilateral ties in the financial sector. It was led by senior officials from the Indian Ministry of Finance and Her Majesty’s Treasury from the UK.

Theme of the Dialogue:

i.Both sides agreed to strengthened financial services cooperation between India and the UK.

ii.As discussions were held on the UK-India GIFT (Gujarat International Finance Tec-City) City Strategic Partnership, both sides agreed for further collaboration under this which will also include sustainable finance and FinTech.

iv.The two sides will also launch policy papers on GIFT City, FinTech and cross-border trade and investment at the next EFD.

i.Bilateral trade between the UK and India stood at over £18 billion in 2020.

ii.India is the UK’s second largest source of investment in terms of number of projects.

iii.In May 2021, the UK’s Prime Minister Alexander Boris de Pfeffel Johnson and Indian Prime Minister Narendra Modi aimed to double the UK-India trade value over the next decade and also to negotiate on a comprehensive free trade agreement (FTA).

iv.Notably, financial cooperation is one of the key pillars of the 2030 Roadmap adopted by India-UK.

Reserve Bank of India(RBI), the Securities and Exchange Board of India(SEBI), International Financial Services Centre Authority (IFSCA), Insurance Regulatory and Development Authority of India (IRDAI), the Bank of England, and the Financial Conduct Authority.

The Maharashtra State Innovation Society (MSInS) has signed a Memorandum of Understanding (MoU) with Foreign and Commonwealth Development Office (FCDO), Government of the United Kingdom (UK) under the ‘ACT4Green’ programme.

About the United Kingdom (UK):

Capital– London
Currency– Pound sterling
River Severn is the longest river in the UK, whereas the 2nd longest river, River Thames flows through the capital city of London.