On September 17, 2019, The 16th Session of the Joint Economic Commission (JEC) 2019 between India & Belgium -Luxembourg Economic Union (BLEU) was held in New Delhi with the aim to improve bilateral economic and trade relations between the two countries 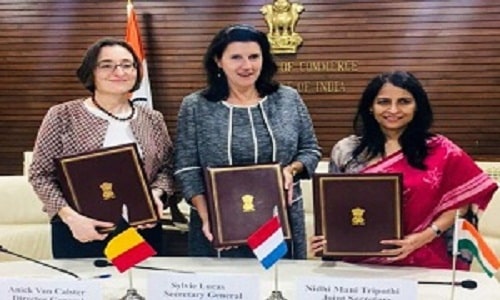 Key points:
i. The importance of JEC between India and BLEU was reiterated & both sides negotiate cooperation on a wide range of issues of mutual interest, such as, transportation and logistics, renewable energy, aerospace and satellites, audio and visual industry, agro and food processing industry, life sciences, ICT(Information and communications technology), traditional medicine, Ayurveda and yoga, and tourism .
ii. The Session was co-chaired by Commerce Secretary ,Anup Wadhawan and Ms. Sylvie Lucas, Secretary General of the Ministry of Foreign and European Affairs of Luxembourg & was attended by various officials of External Affairs Ministry, New & Renewable Energy, Information and Broadcasting and railways.
iii. JEC: This Sessions were established based on the agreement signed in 1990 in New Delhi. It organized every other year in capital cities of the three countries alternatively and are the main vehicle for discussing economic and commercial issues between India & BLEU.
iv. Trade report:  The bilateral trade between India-Luxembourg was $ 161.98 million in 2018-19 & $ 17.2 billion between India-Belgium in 2018-19.
v. BLEU: It is an economic union between Belgium and Luxembourg, was created by a treaty, signed on 25 July 1921, despite a referendum against such a proposal, between Belgium and Luxembourg, and came into effect upon ratification by the Luxembourg Chamber of Deputies on 22 December 1922.