The International Day of Non-Violence is observed on October 2, the birthday of Mahatma Gandhi. This day is referred as Gandhi Jayanti in India.

In January 2004, Iranian Nobel laureate Shirin Ebadi had taken a proposal for an International Day of Non-Violence from a Hindi teacher in Paris teaching international students to the World Social Forum in Mumbai.

The Prime Minister Narendra Modi inaugurated the Pravasi Bharatiya Kendra in New Delhi. He launched a booklet on Yoga Protocol for Diabetes control, and distributed prizes to winners of the ‘Know India’ Quiz at the exhibition on “Gandhi – Ek Pravasi. 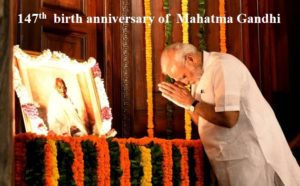 Department of Posts organised a nation-wide competition inviting entries for designing the commemorative postage stamps of denominations of Rs 25 and Rs 5 and a miniature sheet.

Swachh Bharat Mission was launched throughout length and breadth of the country as a national movement on 2nd October , 2014.

On the occasion of second anniversary of Swachh Bharat Mission, one lakh villages have become Open Defecation Free

The Union Home Minister Shri Rajnath Singh attended the ‘Swachhta Rally‘ and felicitated those who made contribution to the ‘Cleanliness Drive’. He also administered ‘Swachhta Shapath‘ (Cleanliness pledge)

Information and Broadcasting Minister M Venkaiah Naidu awarded Katyayan with a certificate and a cash prize of Rs. 10 lakh to Katyayan Shivpuri.

Union Ministry of Tourism has conferred the ‘Cleanest Tourist Destination’ on Sikkim capital, Gangtok and Clean Cities in million plus population category award to two cities Chandigarh and Mysore