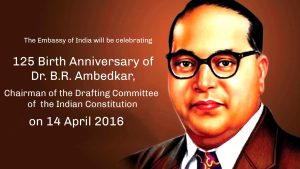 Documentary: A Man of the Century

Government to launch Gram Uday to Bharat UdayAbhiyan from 14th to 24th April, 2016

125-foot tall Ambedkar statue to come up in Hyderabad

Hyderabad will feature a 125-foot tallStatue of B R Ambedkar, the architect of Indian Constitution, just beside the city’s famous landmarks such as Hussian Sagar Lake and the state secretariat, in a year from now.

PM Narendra Modi to launch National Agriculture Market portal that will have 21 mandis from 8 States to connect e-mandis in several states at a function in the national capital on the 125th birth anniversary of Ambedkar.

Ambedkar was born on April 14, 1891 in a poor Mahar family in Madhya Pradesh. He died in 1956 and was posthumously conferred with the Bharat Ratna, India’s highest civilian award, in 1990.