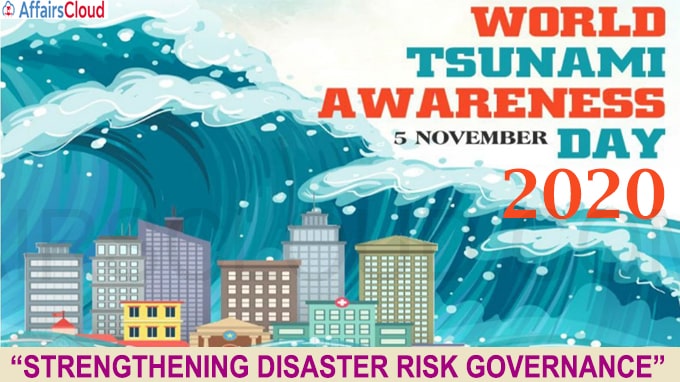 The theme of the 2020 World Tsunami Awareness Day is “Strengthening disaster risk governance”.

The day encourages the development of national and community level, local disaster risk reduction strategies to save more lives.

The observance of 2020 World Tsunami Awareness Day promotes the target (e) of “Sendai Seven Campaign” – Substantially increasing the number of countries with national and local disaster risk reduction strategies by 2020.

ii.Japan initiated the idea of the World Tsunami Awareness Day due to its repeated and frequent experience which built the major expertise in the areas of Tsunami early warning, public action and building back better to reduce the future impacts.

ii.Tsunami is a series of huge waves created due to any underwater disturbance like earthquakes below or near the oceans.

i.In the past 100 years around 58 Tsunami have occurred and claimed more than 260000 lives which is on average 4600 lives per disaster.

ii.The highest number of deaths in this period was caused by the December 2004 Indian Ocean Tsunami, which accounted for around 227000 fatalities in 14 countries including Indonesia, Sri Lanka, India and Thailand.

Efforts to reduce the risk of Tsunami:

ii.UNDRR had launched Tsunami Evacuation during COVID-19: A Guide for School Administrator to create awareness about Tsunami and educate on the Tsunami evacuation during pandemic.

i.The Sendai Framework for Disaster Risk Reduction, is a people focused and action oriented approach to the disaster risk reduction which can be applied to both small scale and large scale disasters caused by man-made hazards or natural hazards.

ii.This approach can also be used to disasters related to environmental, technological and biological hazards and risks.

The Seven Targets of Sendai Framework:

Target D: To reduce disaster damage to critical infrastructure and disruption of basic services, among them health and educational facilities, including through developing their resilience by 2030.

Target E: To increase the number of countries with national and local disaster risk reduction strategies by 2020.

Target F: To enhance international cooperation to developing countries through adequate and sustainable support to complement their national actions for implementation of the present Framework by 2030.

Target G: To increase the availability of and access to multi-hazard early warning systems and disaster risk information and assessments to people by 2030.

United Nations Educational, Scientific and Cultural Organisation (UNESCO) recognises Venkatraipur and Noliasahi, villages of Odisha as ‘Tsunami Ready’ for their overall preparedness to face the tsunami.With this recognition, Odisha became the first state in the India and India became the 1st Country in the Indian Ocean region to achieve the honour from the IOC of UNESCO.