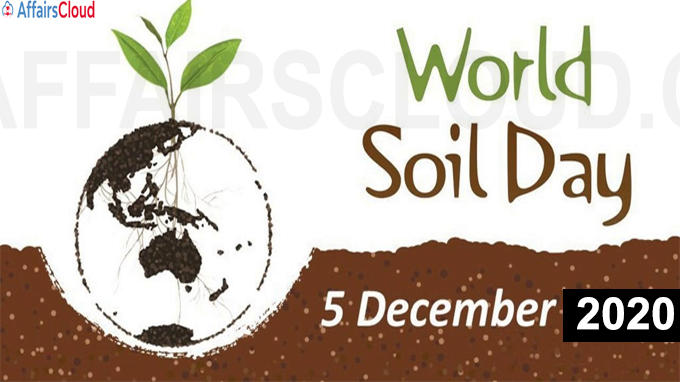 United Nations(UN)’s World Soil day is annually observed across the globe on 5th December to focus the global attention on the importance of healthy soil and to promote the sustainable management of soil resources. The 1st world soil day was observed on 5th December 2014.

The Food and Agriculture Organization (FAO) of the United Nations has launched a campaign “Keep soil alive, protect soil biodiversity” with an aim to raise awareness among the public about the importance of sustaining healthy ecosystems and human well-being.

The date 5th December was chosen to observe the world soil day, since it coincides with the official birthday of the late H.M. King Bhumibol Adulyadej, King of Thailand who played a major role in the World soil day initiative.

ii.He was recognised as an active promoter of soil awareness in Europe and across the globe.His works focus on the role of soil in food scarcity.

iv.The award instituted in 2016 aims to maintain the momentum generated by the International Year of Soils 2015.

i.Indian Council of Agricultural Research (ICAR), responsible for coordinating agricultural education and research in India won the King Bhumibol World Soil Day Award 2020 for its commitment to raise awareness on the importance of healthy soil through event of World Soil day 2019 as “Soil Health Awareness Week” from 1st to 7th  December 2019.

ii.The award comprises a  medal, a USD 15000 cheque, as well as a trip to Thailand to receive the prize.

iii.Princess Maha Chakri Sirindhorn of Thailand will present the award at the ceremony which will be organised in Bangkok in January 2021.

iv.The 6th Global Soil Partnership(GSP) Plenary Assembly endorsed the establishment of the annual King Bhumibol World Soil Day Award (WSDA) to recognise the individuals or institutes who made an effort to organise a successful celebration.

i.As a part of the celebration of World Soil Day 2020, FAO, the International Union of Soil Sciences (IUSS), and the Global Soil Partnership (GSP) announced the winners of the children book contest on Soil Biodiversity with the motto “Keep soil alive, protect soil biodiversity”.

ii.The winners of the children’s book contest are,

First prize: “The science & spectacle of Soil Life by Roly Poly” by JiaJia Hamner of the United States and Sharada Keats of Global Alliance for Improved Nutrition, United Kingdom.

ii.The FAO supported the formal establishment of World Soil Day under the leadership of the Kingdom of Thailand and within the framework of the Global Soil Partnership.

iii.In June 2013, at the FAO conference unanimously supported the establishment of World Soil Day and requested the 68th United Nations General Assembly(UNGA) to officially adopt the international day for soil.

iv.The UNGA adopted the resolution A/RES/68/232 on 20th December 2013 and proclaimed the 5th December of every year as the World Soil Day.