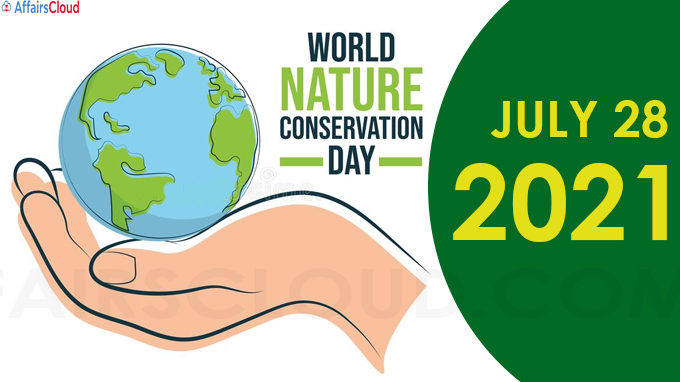 World Nature Conservation Day is annually observed across the globe on 28th July to highlight the importance of nature and the environment. The day also creates awareness about the significant role of nature conservation in protecting the Earth.

i.Conservation of nature is defined as the management and utilization of natural resources like water, oil, coal, natural gas, metals, stone and sand.

ii.Conservation is the care and protection of these resources so that they can persist for future generations.

Threats to the environment:

i.The threats to the environment include Deforestation and Forest Degradation; Climate Change; Urbanisation; Oil and Gas Development; Pollution; Soil erosion and degradation; usage of plastics; illegal wildlife trade and others.

ii.According to the Global Forest Resources Assessment 2020 of the Food and Agriculture Organization, the annual rate of deforestation was estimated at 10 million ha, down from 12 million ha in 2010–2015.

iii.The area of primary forest worldwide has decreased by over 80 million hectares since 1990.

i.In India based on the area, Madhya Pradesh has the largest forest cover, followed by Arunachal Pradesh, Chhattisgarh, Odisha and Maharashtra.

Efforts of Government of India to Conserve Nature:

i.The urbanisation in India has resulted in the increase of pollution and loss of forest cover and wildlife.

ii.The government has taken various initiatives to increase forest cover and reduce pollution. The initiatives are,

Interventions and Acts to Conserve Nature:

i.The wildlife protection act of 1972 – which established conservation parks and protected areas across India and banned the hunting of endangered indigenous species.

ii.The Forest Conservation act 1980 – which provides for the conservation of forest and protection of its flora, fauna and other diverse ecological components.