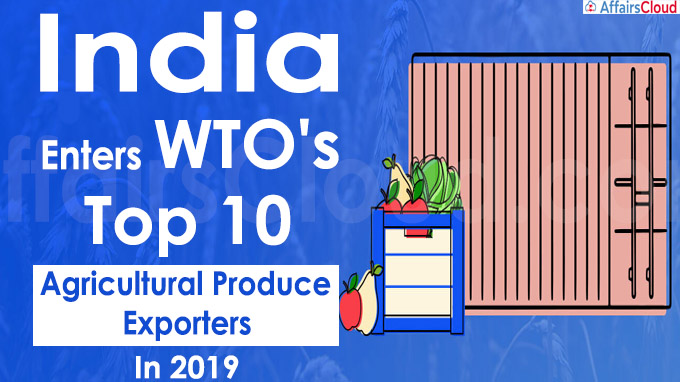 A recently released World Trade Organization (WTO) report has ranked India 9th (holding 3.1% share in global agriculture exports) among the Top 10 list of Agricultural produce exporters in 2019. European Union (EU) with a global share of 16.1% has replaced the US as the World’s largest Agriculture produce exporter (13.8%).

iv.Mexico was ranked 7th in the list replacing Malaysia. It held a global agriculture export share of 3.4%.

iii.The largest traded agriculture product was Soya Beans, India had a meagre 0.1% global share in it. But it was ranked 9th in the world.

iv.In the ‘meat and edible meat offal’ category, India was ranked 8th in the world with a 4% share in global trade.

India lags behind in Value-added Contribution

India has lagged behind as a value-added contributor to World Agriculture Exports.

During a high-level dialogue, WTO Director-General Ngozi Okonjo-Iweala has stated that 5 members of the WTO namely India, Germany, US, France and China will account for 75% of the entire global output of COVID-19 vaccines in 2021.