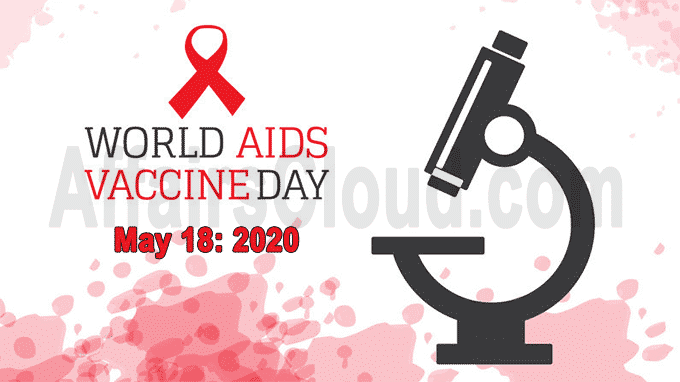 On May 18, 2020, World AIDS Vaccine Day (or HIV Vaccine Awareness Day) has been celebrated all over the world to recognize and acknowledge the hard work of the thousands of health professionals, volunteers, members of the medical field and scientists who have been working together for so many years to make HIV (Human Immunodeficiency Virus) / AIDS (Acquired immunodeficiency syndrome) vaccine.
It is also an occasion when people are made aware of the measures and possible treatment to avoid AIDS.

i.The observance of this day is headed by National Institute of Allergy and Infectious Disease (NIAID), Washington DC, US (United States).

ii.The first AIDS Vaccine Day was celebrated on 18 May 1998. A year before that, then US (United States) president Bill Clinton insisted on the discovery of a vaccine to treat the epidemic.

iii.According to the World Health Organization (WHO), by 2018 this disease has been found in 37.9 million people worldwide & about 7,70,000 people died of the disease in the same year.

iv.The United Nations (UN) has set a target to eliminate AIDS from its roots by 2030.