President of India, Shri Pranab Mukherjee has appointed Justice Tirath Singh Thakur, Judge of Supreme Court to be the 43rd Chief Justice of India with effect from 3rd December, 2015 while exercising his powers conferred by clause (2) of article 124 of the Constitution of India. 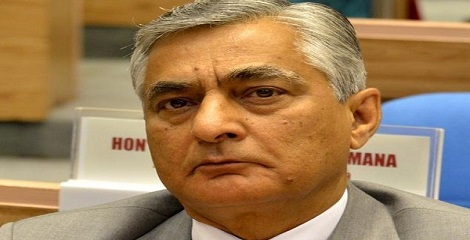 About Justice Tirath Singh Thakur
1952 born enrolled as a Pleader in October 1972 and joined the Chamber of his father Late Shri D.D. Thakur, a Judge of High Court of J &K. He practised in Civil, Criminal, Constitutional, Taxation and Service matters in the High Court of Jammu & Kashmir.

Benches led by him
Justice Thakur headed the bench which had delivered the verdict on reforming the Board of Control for Cricket in India in the wake of the IPL betting and spot-fixing scandal.