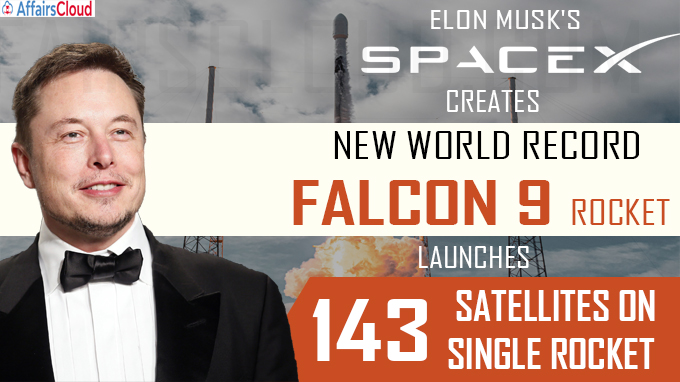 On January 24, 2021, SpaceX  successfully created a New World Record by launching 143 Satellites in a single mission. The satellites were launched using the Falcon 9 Reusable rockets  from the Cape Canaveral Space Force Station in Florida, United States of America. With this, SpaceX bettered Indian Space Research Organization’s (ISRO) record of deploying 104 satellites in a single mission in February 2017.

The Launch is also the first dedicated mission for SpaceX under SmallSat ‘Rideshare’ program called Transporter-1.

i.Objective – With the launch of the satellites, SpaceX is planning to provide Global broadband internet coverage by 2021.

ii.Notable satellites launched in the mission:

Note – India has listed the building of reusable rockets as one of its targets of the Decade (2021-30).

i.On 3rd September 2020, Falcon 9 of SpaceX, launched the 12th batch of starlink missions with 60 starlink satellites into orbit. Falcon 9 was launched from the Kennedy Space Center of NASA, Florida.