Hello Aspirants. Welcome to Online Reasoning Section with explanation in AffairsCloud.com. Here we are creating Best question samples from Seating Arrangements with explanation, which is common for competitive exams. We have included Some questions that are repeatedly asked in bank exams !!!

I.Study the following information Carefully to answer the given questions

Q(6 -10) Study the given information carefully and answer the questions that follow: –

Eight friends – P, Q, R, S, T, U, V and W – are sitting around a circular table facing the centre but not necessarily in the same order. Each of them likes different cricketers – Kohli, Rohit, Dhawan, Smith, Warner, Root, Gayle and Nehra. 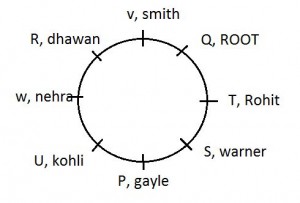