Direction(1-5): Study the following information carefully to answer the given questions
Six persons P, Q, R, S, T and U are sitting around a circular table facing towards the centre of the table in a restaurant. They have ordered for different items i.e. samosha, cutlet, French fries, omelette, sandwich and milk-cake. They are wearing T-shirts of different colours, i.e. white, black, green, red, yellow and blue but not necessarily in the same order. 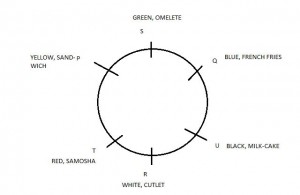 Direction(6-10): Study the following information carefully to answer the given questions
There are six boys P, Q, R, S, T and U. They want to go out with six girls A, B, C, D, E and F, not necessarily in the same order. The pairs went to different cities Delhi, Mumbai, Kolkata, Chennai and two of them went to Jaipur. They like different bikes viz KTM, Bullet, Pulsar and Apache. But KTM and Bullet are preferred by two pairs. Further information is as follows: