Aim: To provide cooking gas connections to 5 crore below-poverty-line beneficiaries over the next three years. 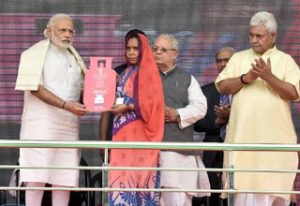 Seeks to voluntarily surrender cooking gas subsidies for one year was launched in January, 2015.

States and their Give It Up users

Maharashtra, Uttar Pradesh, Delhi, Karnataka and Tamil Nadu – half of the people given up LPG subsidies

The PM flags off a fleet of 11 e-boats following by interaction with boatmen at the Assi ghat.