The important cause of pollution especially land and water pollution is the non -bio degradable Plastics. The most important bio discovery of the century has come with the discovery of bacteria that can decompose Plastics 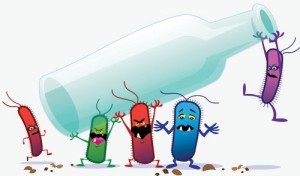 Background of the discovery

250 debris contaminated samples were taken for research. It was noted that some microorganisms were attached to the primary surface of the PET. Later after 6 weeks thin grade of PET was decomposed. This led to the identification of particular bacteria that decays PET.